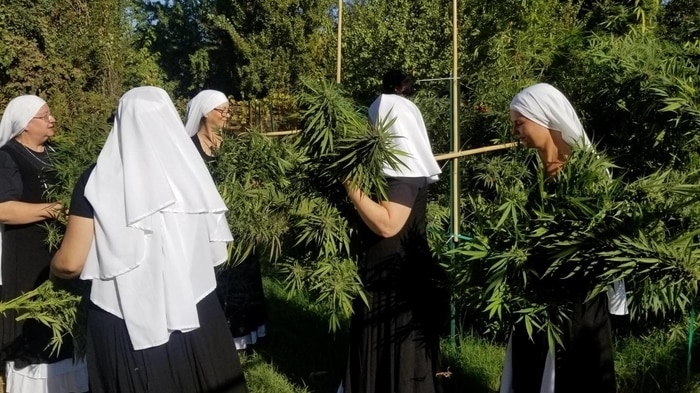 A group of nuns are pulling in more than $1,100,000 a year after transforming a convent into an international marijuana operation.

60-year-old Sister Kate Meeusen in 2011 launched the Sisters of the Valley in California’s Merced County with only 12 plants. Nowadays, the business is blossoming and the union of nuns have big hopes of broadening their medicinal marijuana conglomerate. The nuns utilize their CBD (cannabidiol) products, which include oils and salves, to treat everything from cancer to epilepsy – and declare to have cured eight people thus far of addictions.

“We don’t like the white man rule,” Sister Kate said. “Farm people are very slow to adapt to new ideas, people are stuck in the 1950s with their ideas towards the cannabis plant for medicinal use. We have a 100 per cent success rate in curing people of their addictions. Admittedly we don’t have a huge sample size, we worked with eight people who were addicted to either alcohol, tobacco or meth, but they all got better. That’s a better success rate than Alcoholics Anonymous.”

Sister Kate continued: “Gradually the world is starting to open up to the idea of cannabis as medicine, rather than treating it as a dangerous drug. We intend to have enclaves in every town and province in the next 20 years. We’re going to be doing more and more with Hollywood because that’s the megaphone to the world. We’re also planning an edgy, political series done in cartoon form. We are accustomed to fighting for the rights of the marginalized. It’s an important bill that would allow California to join some 20 other states and Canada in denying this privilege as an excuse for not reporting abuse.”

Will Smith disclosed in a podcast interview recently that he would “consider” running for president “at some point.” In an interview released Monday, the 52-year-old rapper told Crooked Media’s “Pod Save America”: “I think for now I’ll let that office get cleaned up a little bit. And then I’ll consider that at some point down… END_OF_DOCUMENT_TOKEN_TO_BE_REPLACED

Vaccination programs are currently on roll-out and countries that vaccinated for COVID-19 are talking. Questions are everywhere, and it is building up people’s anxieties about vaccination. How has the vaccine affected their population? Are the vaccines any good? Should we research more on newer vaccines? Can the vaccines kill the mutated virus? The answers change… END_OF_DOCUMENT_TOKEN_TO_BE_REPLACED

Texas Senator, Ted Cruz, received heavy criticism after taking a vacation to Cancun with his family in the middle of a crisis. The latest power crisis in Texas left hundreds of homes without electricity and water for more than 48 hours in negative degree weather. This has left the lives of many Texas residents in… END_OF_DOCUMENT_TOKEN_TO_BE_REPLACED