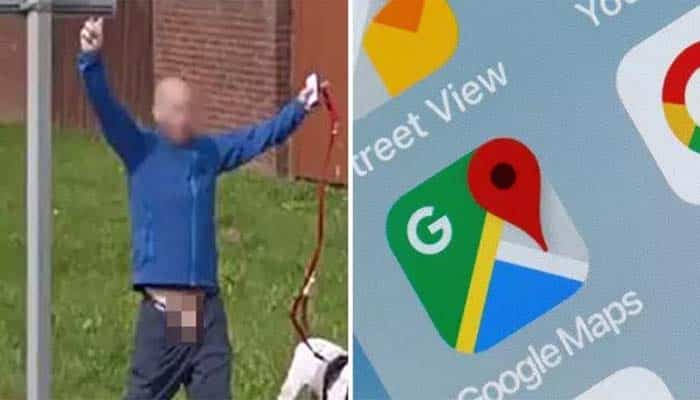 It turns out, Google Maps has another purpose besides fuelling conspiracy theories (check out disappearing Japanese island or missing flight MH370).

It’s also useful for catching the antics of lewd citizens around the globe, like this fella, who decided walking around Liverpool with his pants down was a good idea.

The mystery man was clearly up to no good, but what’s confusing is that Google Maps decided to blur his face, but let the penis hang out in all it’s glory.

“Shall we blur out his face?”

“What about his cock?”

The blunder was spotted by Twitter user Callum Rimmer, who also shared a video close up of the trouser snake.

Unfortunately, Google cottoned on to the mistake, and has since fixed the error. Well, they blurred out the guy’s entire body, along with his dog.

Better safe than sorry, we guess…

This isn’t the first time Google Maps has caught someone behaving inappropriately. Last year, a couple in Peru divorced after catching the wife was spotted with another man on Google Street View.

The wife and her secret lover were caught snuggling on a bench in Lima, Peru, and even though the encounter had taken place five years previously, the pair split up.

Not to mention the time the ol’ “wrap a car in clingfilm” prank was caught in action thanks to the Google Maps car.

The moment he was inaugurated, immediate changes made by Biden made headlines across the country. These are many of the controversial issues and topics that were shunned and ridiculed by the former administration. Americans can finally breathe a sigh of relief that these concerns have finally reached government policies. It seems clear that Biden has been… END_OF_DOCUMENT_TOKEN_TO_BE_REPLACED

Presidential pardons are one and many in the history of the US. There are many times when US Presidents granted reprieves for their citizen’s misdeeds. The US President may grant a pardon for any individual, including himself, for any crimes done against the country and its citizens. This issue of Presidential pardons has been trending… END_OF_DOCUMENT_TOKEN_TO_BE_REPLACED