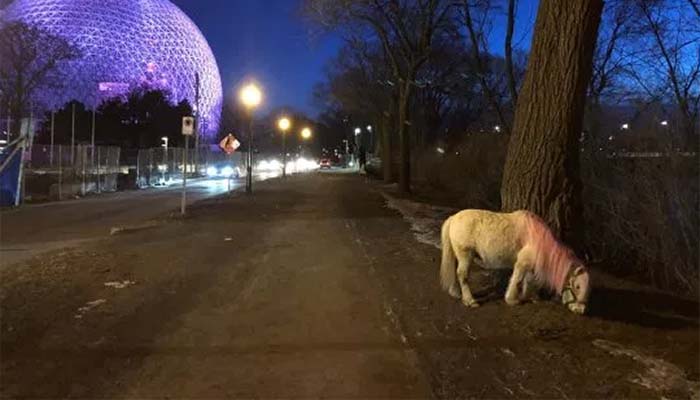 Well, this is the most magical news story we’ve heard in ages (perhaps ever).

Canadian citizens are on the hunt for a “tiny pink horse” that only appears at night.

There have been several sightings of the pony with the pink mane in Montreal, but so far no one has been able to track the little guy down.

Now, the feral steed has become an unwitting social media star, after concerned animal lovers set up a Facebook page called “Save the little horse.”

In every picture, the nocturnal neigh neigh is wearing a bridle and is sporting a bright pink mane, which has sparked rumours that the mysterious creature is a hoax.

The first image of the pony can be sourced to Reddit, where user Gilles Bouchard said in French: “HI!! I was walking on the islands this morning and I came across this very small horse. Has anyone seen it !?”

“I tried to approach him but he was scared and he left. Has his owner lost it or what?! How come a helpless horse is alone in a park so early in the morning!?! I NEED YOUR HELP! If you see it …. share the photo please!”

Gilles claims he has since been sent several snaps of the horse, which he has been posting to Facebook in the hopes of finding the animal.

The Societe du Parc Jean Drapeau, which manages the Ile Saint-Helene, said they had sent groundskeeps out to “actively look for traces of the animal.”

However, CCTV footage and physical searches have yet to yield any results.

Spokesperson Gabrielle Meloche said: “We remain on watch to find the animal, if it is still on the territory of Parc Jean-Drapeau.

“If it is there, we will take all necessary measures to ensure the animal is safe and returned to competent authorities.

“I can also confirm that there was no activity at Parc Jean-Drapeau that would justify the presence of the animal on Ile Saint-Helene.”