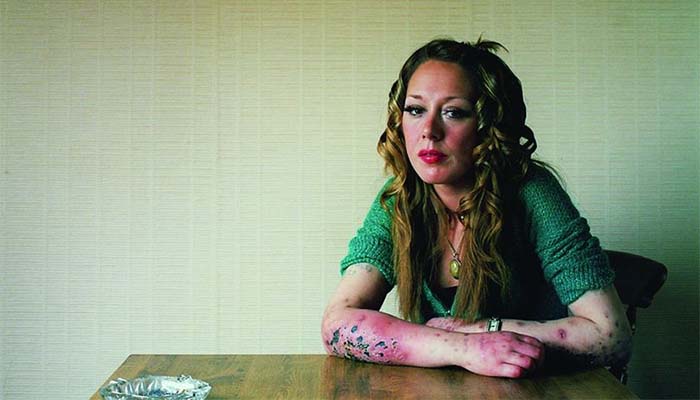 An ex-heroin user is sharing photos of her drug-ravaged arms online in a bid to help other addicts.

Drugs survivor Rachael Keogh posted the disturbing images to the web as she confessed she’d lost 10 friends to addiction since Christmas.

However, Keogh says she is proud of her scars, as they remind her of what she’s been through.

She told The Sun: “They always remind me of where I’m coming from.”

The result of her veins collapsing from repeatedly injecting heroin in her teens, Keogh almost lost her arms to her addiction.

Now, the 38-year-old wants to use her story to help others.

She told the Irish Mirror: “10 of my friends have passed away [of drug related-deaths] and one of them was really close.”

Keogh, from Dublin, Ireland, also shared the story of her spiral into addiction, as well as how she came back from the brink of death.

She said: “I hit rock bottom when I was 15 I think. My veins started to collapse in my body because of the repeated injections.

“I ended up injecting into capillaries which are small veins that can’t handle heroine, and basically what happened was the citric acid burned through my skin.”

The mum-of-one began taking ecstasy when she was just 13-years-old, and says it was a “quick downward spiral” from there.

She originally began taking heroin to help with the comedown of the ecstasy, but ended up falling deeper into addiction.

However, Keogh mentally detached herself from the awful situation she was in to cope.

She explained: “When I became drug free, and I think it’s the same for a lot of people who are in recovery, you don’t connect to that kind of stuff right away.

“It takes time for you to be able to thaw out and to actually go, ‘Oh my god, that happened in my life.'”

Her circumstances were worsened when she was sent to jail at the age of 15. She spent 10 years in prison, which she described as “like being sent to a school to learn how to become a better criminal and a better drug addict.”

She continued: “I think for me it was probably the worst thing that could’ve ever happened to me was the fact that I was put in to prison when I was 15. I was only a child.

“I was put in with women who were up to 70 years of age. I was put into a confined area where people were taking drugs with dirty needles, where I had been given drugs by older women, and you’re being pushed into the drug culture.”

Keogh has since written a book about her life, and is currently studying for a degree in interior design.

Just this week, lawmakers approved a bill establishing the District of Columbia (D.C.) as the 51st state of the United States of America. This is after multiple calls and protests from the citizens to finally consider D.C. as a state.  However, the bill is not out of the woods yet as it faces multiple oppositions… END_OF_DOCUMENT_TOKEN_TO_BE_REPLACED

John Bolton’s new book entitled ‘The Room Where it Happened’ had been stirring up quite the attention since it was announced for release last week. Officially released only June 23, the new book seems to threaten the Trump administration as there had been moves to get it unpublished. The request was later on turned down… END_OF_DOCUMENT_TOKEN_TO_BE_REPLACED

Learning about the Juneteenth Holiday The Juneteenth holiday, celebrated every 19th of June, is a commemoration of the liberation of enslaved African-Americans in the United States. It was on the 19th of June 1865 when Union Army General Gordon Granger announced General Order No. 3 in Galveston, Texas officially emancipating slaves in the entire state.… END_OF_DOCUMENT_TOKEN_TO_BE_REPLACED