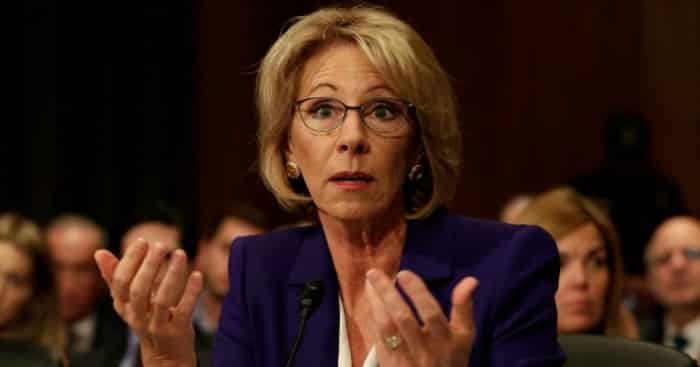 Education Secretary Betsy DeVos is hardly known for being a wordsmith. More often than not, when she speaks she ends up putting her foot in her mouth. DeVos seems to have learned her lesson to some extent as she now answers most questions by saying, “I’ll have to check on that” or “I’m not aware of that.” Anything to avoid having another controversial statement in the headlines. These Betsy DeVos quotes are so illogical (and just plain wrong) that they’ll seriously piss you off.

School shootings are out of control in this country, but there has yet to be a solution put in place. Remember when Republicans decided it would be a good idea to have armed security guards on campuses? Well, DeVos seemed to think this was common practice when she said:

I will refer back to Sen. Enzi and the school he is talking about in Wyoming. I think probably there, I would imagine there is probably a gun in a school to protect from potential grizzlies.

Umm, not exactly. The school had fences to keep the bears out, but they definitely don’t walk around armed with the kind of weapon that would be needed to take down a grizzly.

In a pathetic attempt to defend a 10 percent cut to federal education spending budget, DeVos started spewing nonsensical and just plain wrong facts about what makes for effective learning. She actually tried to argue that having fewer teachers in schools and larger class sizes would improve our public schools saying:

Students may be better served by being in larger classes if by hiring fewer teachers, a district or state can better compensate those who have demonstrated high ability and outstanding results.

Obviously, there are no reports to back any of this up. On the contrary, research has found that smaller class sizes and more one-on-one time with an instructor increases learning.

If you’re a millennial, then you know just how overwhelming student loans are. Not only did you go to college after tuition costs jumped to astronomical amounts, but lenders decided to take advantage of this by offering impossible to pay loans to a bunch of teenagers. Student loan forgiveness programs are garbage, leaving most of us drowning in debt, but that wasn’t good enough for DeVos. She decided cutting student loan aid was the best way to lend us a hand. DeVos explained her decision by saying:

While students should have protections from predatory practices, schools and taxpayers should also be treated fairly as well. Under the previous rules, all one had to do was raise his or her hands to be entitled to so-called free money.

Free money? I wouldn’t call being lied to about loan programs, harassed for payments at home and work, and astronomical interest rates free. Also, it’s next to impossible to receive student loan forgiveness and requires much more than raising a hand to attempt. As the Secretary of Education, DeVos should really be aware of these things. However, an ethics report revealed that DeVos has ties to a student loan debt collection firm that have led many people to question her judgment.

DeVos’ confirmation hearing was a disaster from start to finish. She refused to answer most of the questions directed at her and gave little indication of what her plans were for our country’s education system. Even more alarming, she seemed to be clueless when asked about several basic education laws. Her “school choice” program has raised many concerns as it resembles the voucher programs used to reduce private school tuition for some students. When asked by Sen. Patty Murray if she could confirm that she would not work towards privatizing public schools or taking funds from public education, Devos responded by saying:

I look forward, if confirmed, to working with you to talk about how we address the needs of all parents and all students. We acknowledge today that not all schools are working for the students that are assigned to them. I’m hopeful that we can work together to find common ground and ways that we can solve those issues and empower parents to make choices on behalf of their children that are right for them.

See how she spoke in circles and never answered Murray’s question? DeVos seems to be pretty good at doing that. Perhaps the president taught her how. Murray responded to DeVos’ lack of answer by saying, “I take that as not being willing to commit to not privatizing public schools or cutting money from education.” DeVos replied by saying, “I guess I wouldn’t characterize it in that way.” What a waste of time!

5. On Equal Treatment In Schools

During Obama’s presidency, a guide was created to help teachers and school officials to identify and avoid discriminatory discipline in schools. This was largely designed to educate schools on why it’s inappropriate to call the police on a black student for minor disciplinary issues when white students are sent to the principal or given detention. Of course, since Obama’s name is on it, Trump’s administration is going to try their best to get rid of it. When asked about the plans for this regulation in a “60 Minutes” interview she said:

DeVos sounds like a broken record. Stating that she will be “studying” a rule seems to be her go-to answer whenever she’s asked about a regulation that’s already in place.

6. On Sexual Assault On College Campuses

Obama created sexual assault regulations (Title IX) that would hold colleges and universities responsible for preventing and addressing sexual assault and harassment cases on campus. DeVos changed the guidelines so that schools can require stronger evidence of assault from accusers. It also changed the definition of sexual harassment to “unwelcome conduct on the basis of sex that is so severe, pervasive and objectively offensive that it denies a person access to the school’s education program or activity.” Ummm, what? When asked about these changes in the same “60 Minutes” interview DeVos said:

The number of false sexual assault accusations make up such a small percentage that it shouldn’t even be an issue. Thank for pushing back women’s rights several decades though!

Gift-giving isn’t just a seasonal affair between friends, families and acquaintances. The art of gift-giving is also conducted on a national scale with countries often sending each other big, weird and expensive gifts. Experts in all things gifts, Vanilla Reindeer put together some examples of these expensive and odd gifts that have been shared between… END_OF_DOCUMENT_TOKEN_TO_BE_REPLACED

There are lots of ways you can make Pres. Trump feel welcome: you can offer him coffee, or mow a penis into a field for him to view as his plane lands. The willie in question has been chopped by Born Eco ahead of the arrival of President Trump, who visited the UK Monday for… END_OF_DOCUMENT_TOKEN_TO_BE_REPLACED

The year isn’t even halfway over, yet Donald Trump has managed to make a fool of himself and our country countless times. From inviting the national college football champions, the Clemson Tigers, all the way to the White House for some McDonald’s to his to the dreaded results of Mueller’s investigation, it has been one… END_OF_DOCUMENT_TOKEN_TO_BE_REPLACED

Republicans have always said that when they gained control in Congress, they would work to overturn Roe v. Wade and here they are, cashing in on that promise one state at a time. So far, Alabama, Arkansas, Georgia, Kentucky, Missouri, and Ohio have all passed incredibly restrictive laws on abortions, making it illegal for women… END_OF_DOCUMENT_TOKEN_TO_BE_REPLACED

If you’re on Snapchat, then you’ve probably played around with (and were likely horrified by) their filter gender swap filters. While you’re probably using these filters to send hilarious pics to your friends, some guys using them to create Tinder profiles. What likely started out as a joke has quickly evolved, and these guys are… END_OF_DOCUMENT_TOKEN_TO_BE_REPLACED

“Milkshaking” is a hilarious trend in Britain where a milkshake is thrown at and ideally lands on a far-right politician or activist. The point of this nonviolence protest is to humiliate them without causing injury. Physical injury at least. There’s no doubt that milkshaking has led to a few bruised egos. Not only is this… END_OF_DOCUMENT_TOKEN_TO_BE_REPLACED