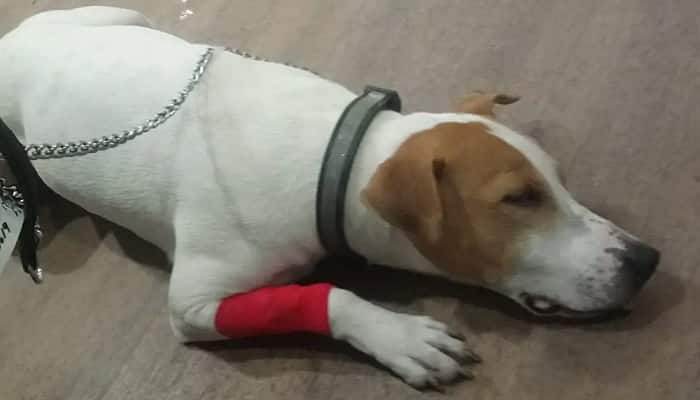 Dogs are known to eat homework and crucial school projects (pfft yeah, right), preventing their owners from getting good grades. However, one dog upped his game and ate something more than just paperwork– he ate a video game. It nearly cost him his life and he even needed an emergency surgery to have it removed.

Rocco, the Staffordshire Terrier is the doggo in question. You could say that Rocco bit off more than he could chew. His owner, Sean Johnston, noticed that the pooch suddenly started vomiting and refused to eat food. So, Johnston rushed Rocco to PDSA‘s Glasgow Shamrock Street Pet Hospital. Lo and behold, they found out via x-ray that Rocco swallowed a video game cartridge from a Nintendo DS console:

Of course, the veterinarians only found out what that rectangular object was once they took it out. The said video game cartridge was lodged in Rocco’s intestines and prevented him from digesting anything and it nearly cost him his life if not for the emergency surgery. Here’s the Nintendo DS cartridge after the emergency surgery:

“He wasn’t acting himself at all and we were worried he’d eaten a corn on the cob, but we were so shocked when the vet said it was from a video game. We don’t own a Nintendo or anything like that so we’re baffled as to where he got it from,” according to Johnston. Still, they were thankful that Rocco made a brilliant recovery as he was actually a rescue dog and they had only known him for six months.

Rocco has now fully recovered from too much video game consumption, literally.