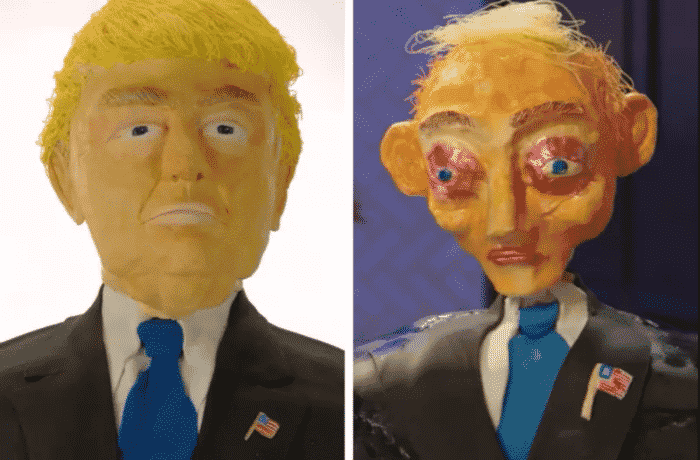 If you enjoy scrolling through photos of Pinterest fails, then you’ll just love Netflix’s show “Nailed It.” It’s a hilarious nontraditional baking competition where contestants compete to recreate edible masterpieces for a cash prize. The contestants are hardly professionals in the kitchen, so as you can imagine, their creations are often disasters. Several judges determine the winner by declaring one contestant as the baker who has “nailed it” and the rest who have “failed it.”

When an episode of “Nailed It” featured a cake resembling Donald Trump, the results certainly didn’t disappoint and likely sparked nightmares all over the country.

Here are some other Donald Trump cakes that would fit in perfectly on this show, and whether they have “failed it” or “nailed it”:

Donald Trump ugly mug is definitely recognizable on this homemade cake, making it a likely winner on an episode of “Nailed It,” but it’s lacking a few essential qualities. The skin tone is far too pale, even the president himself would request a darker complexion. Also, while the man is certainly on the heavier side, his chin isn’t completely absorbed by his face just yet. This cake is also missing ears, and even though Trump rarely uses them, it’s kind of an important facial feature.

2. The Laziest Trump Cake Ever Made

This may be one of those images printed on a sugar sheet that makes baking simple, but it looks edible, and that’s more than I can say about the previous two. Trump’s face is recognizable, and he’s making one of his most iconic expressions, so let’s call it a win.

If it wasn’t for what is written on the side of the cake, it would be hard to determine whether or not this is supposed to be Donald Trump or Bernie Sanders. That might be due to the fact that his hair is the same color as his face and it looks like he has white sideburns. However, as previously mentioned, it says “This cake is !” and “Make dessert great again” on whatever the cake is resting on, so it’s clearly supposed to depict the president. Those tiny hands give it away, but it would be hard to say that they nailed it.

These cake pops look more like orange ping pong balls than Donald Trump, but that might be the point. The goofy expressions on their little faces and their quote boxes make it seem like they’re supposed to look this ridiculous, but it’s hard to look at these without thinking about playing a game of beer pong. So, did they nail it or fail it?

This almost looks like a kid mushed their meals together on their plate and shaped it to look like something that kind of resembles Donald Trump. Is it a cake? Is it potatoes? Is it even edible? Who knows!

Donald Trump is pretty ugly, but is he as ugly as this cake makes him out to be? It’s hard to say. The artist really got every wrinkle, eye bag, and saggy cheek in there, and then sold it to him for $7,000 on the night of the election. If you can bake a cake of a presidential candidate this ugly and then make them pay for it, that’s certainly a win!

Did you know that Jimmy Neutron ran for president? Neither did I! These cookies look yummy but that looks nothing like Donald Trump. His distinctive hairstyle, orange tan, and notorious pursed lips are all missing. Even as a cartoon-like depiction, this one misses the mark.

While the layers of this cake look like they were made by a pro, Donald Trump looks more like a Barbie doll than the President of the United States. There’s nothing about this depiction that lines up with what the president actually looks like. The only reason we know it’s him is because his name is written across it, but the fondant is definitely on point.

Not only are these adorable but they make fun of Donald Trump! They nailed these for sure.

These Donald Trump cake pops look more like an anime villain than our president. While the red and blue cake pops included in the bunch give us a clue that this is supposed to depict a politician, it could be a blonde Kim Jong-Un or a young Mike Pence. It’s safe to say that these cake pops failed it.

No. Just no. This looks more like one of those man-shaped punching bags than Donald Trump. His head is square, he’s naked, and his face looks like it should be punched. Whoever made this definitely failed it. Sorry, not sorry.

You don’t have to agree with Trump’s policies to see just how adorable these hat cakes are. It’s the perfect solution for anyone looking to have a Trump-themed party and is attempting to make their own cake. This would be far easier to pull off than anything with Trump’s face on it. Just be sure to double-check your spelling.

We all know that President Trump is all about making peace with other countries, and that is portrayed perfectly on these cupcakes. Can’t you just picture Trump skipping around, holding hands with Kim Jong-Un? This might be another design using one of those edible sugar pieces with an image printed on it, but it’s just too funny not to love.

8 Political Promposals That Never Should Have Happened

The world is devastated by the news that Britain’s Prince Philip, the Duke of Edinburgh, has died at the age of 99. Palace media confirms that the Duke has expired mid-day today, April 9th. The announcement did not contain any specifics on the cause of death. The United Kingdom will enter a state of national… END_OF_DOCUMENT_TOKEN_TO_BE_REPLACED

Who would have known that religious prophets would be among the most loyal supporters of former President Trump? In fact, it has been observed that the most conservative Christians may have been the right amount of push for Trump’s presidential win back in 2016. Since Trump’s election back in 2016, numerous self-proclaimed “prophets” have been… END_OF_DOCUMENT_TOKEN_TO_BE_REPLACED

President Biden falls and slips multiple times on the Airforce One Steps and PEOPLE ARE GOING CRAZY! What’s the big deal? Some people are hating, while others are making memes just for the fun of it. We are all human, aren’t we? Everyone’s expected to stumble some time in their lives. However, with the internet… END_OF_DOCUMENT_TOKEN_TO_BE_REPLACED