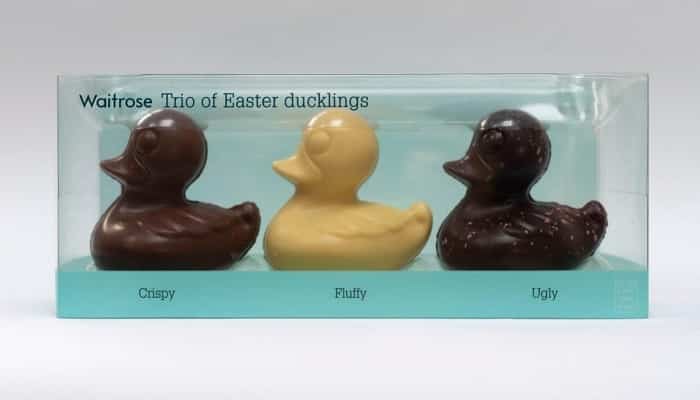 Chocolates are usually sought after not just because they are delectable but because they can also be healthy. As a result, they bring joy to the world, well, most of them anyway. One chocolate from Waitrose has actually achieved the opposite effect– all because it was made to depict an ugly duckling. Apparently, it was a racist move.

According to Waitrose, the ugly duckling chocolate offended a number of customers. So the supermarket decided to scrap the idea and stop selling the chocolate duckling trio. However, the damage has been done and people have already seen what Waitrose did after a customer shared a photo of the $10 Easter treat.

The original online complaint stated, “Crispy, Fluffy and Ugly – trio of Easter ducklings at #Waitrose. Ugly is the dark one on the right. Overheard women saying “this is not right”, I agree, doesn’t look good at all. Thousands of other options… why #ugly?????” Consequently, other people agreed with her.

Waitrose should of done its homework right! The ugly duckling is NOT dark brown it’s GREY! Again advertisers / companies need to be more politically correct otherwise they will have a negative backlash! pic.twitter.com/LFrz8Vz0gr

However, some thought that there was nothing wrong with what Waitrose did. Furthermore, they even defended the case of the dark chocolate ugly duckling saying that in the books, the ugly duckling grows up to be beautiful.

I’m totally against racism but this is NOT racist esp. as in the orig story the Ugly duckling grows up to be the most beautiful of them all! The racists are not Waitrose or those using the trad labels of white, milk & dark choc, but those looking for racism where there isn’t any.

The world has gone [email protected]&king mad!!!! How the hell is this #racist! Complete madness!!!! Waitrose pulls chocolate ducklings from sale after complaints of racism’ | via @telegraph https://t.co/VqIeuMlac8

Still, Waitrose was compelled to apologize afterward. Additionally, they also changed the labeling on the ducklings in order to be able to sell them again, hopefully without any new political incorrectness.

White Chocolate Marshmallow M&M’s Have Arrived, And We Want Them