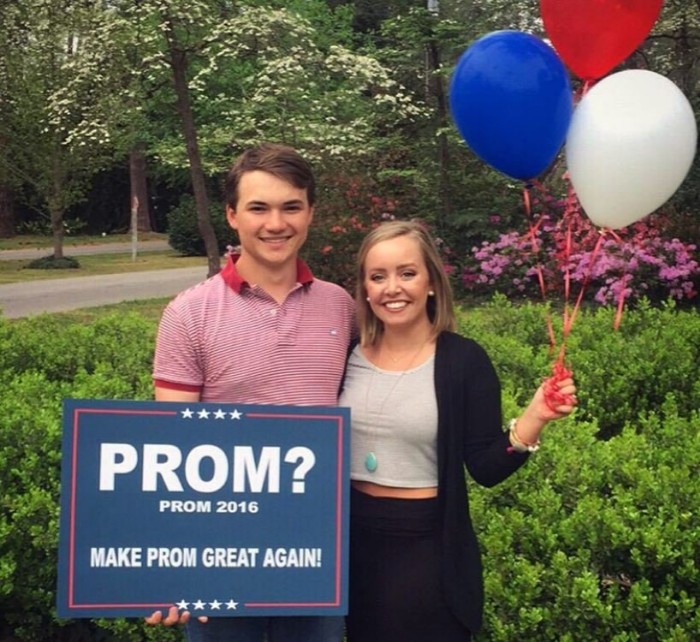 Prom season is just around the corner, and that means we’re in for another round of wildly inappropriate in the media. High school romance these days has somehow gotten linked to blatant racism and awkward political humor, making for some seriously awful prom invites. Here are the political that never should have happened.

1. Racism At Its Finest

Yes, you read that sign correctly. The only reason the black woman in this photo could possibly be smiling is that she is either incredibly uncomfortable or hadn’t received the education needed at that point to understand just how insulting this is. They weren’t the only ones to invite someone to prom referencing cotton picking though.

2. Someone Needs To Take American History Over

While there’s certainly nothing wrong with incorporating Donald Trump into a promposal, it would help if the sign made more sense. It’s the thought that counts though, right?

4. Before Trump Deports You

Only the high school generation growing up today would come up with the concept of a and then do something like this. Hopefully, the illegal immigrant in this photo is the one hiding behind the flag. It would be a shame if a gone viral is what led to them being detained by ICE.

The thought of Trump having immigrants thrown into detention camps and deported may have seemed unrealistic back in 2016, but these days it’s happening on a daily basis. Hopefully, neither of the two in this photo are actually immigrants as it would be just a matter of time before ICE shows up at their front door.

The look on this girl’s face says it all. Nothing depicts true love like racial stereotypes, am I right? And yes, that’s a box of KFC fried chicken and in her arms, which just makes this promposal infinitely worse. Hopefully she said no.

Black women are not “dark meat.” They weren’t put here on this Earth to be your fetish. The only thing worse than the words on this sign are the crowns made of KFC boxes on their heads. This is insulting in every sense of the word.

8. Deport You To Prom

It’s one thing to make light of Trump’s immigration policies if you’re an immigrant, but it’s a whole other thing to do this as a white person. People who have been living in the United States their whole lives are living in fear, being harassed at work and forced to carry proof of citizenship with them everywhere. On top of that, ICE is only targeting Mexicans and Muslims, proving that it’s a racially motivated system. It’s hardly an appropriate subject for a promposal.

These Creative Promposals Will Blow You Away

Will Smith disclosed in a podcast interview recently that he would “consider” running for president “at some point.” In an interview released Monday, the 52-year-old rapper told Crooked Media’s “Pod Save America”: “I think for now I’ll let that office get cleaned up a little bit. And then I’ll consider that at some point down… END_OF_DOCUMENT_TOKEN_TO_BE_REPLACED

Vaccination programs are currently on roll-out and countries that vaccinated for COVID-19 are talking. Questions are everywhere, and it is building up people’s anxieties about vaccination. How has the vaccine affected their population? Are the vaccines any good? Should we research more on newer vaccines? Can the vaccines kill the mutated virus? The answers change… END_OF_DOCUMENT_TOKEN_TO_BE_REPLACED

Texas Senator, Ted Cruz, received heavy criticism after taking a vacation to Cancun with his family in the middle of a crisis. The latest power crisis in Texas left hundreds of homes without electricity and water for more than 48 hours in negative degree weather. This has left the lives of many Texas residents in… END_OF_DOCUMENT_TOKEN_TO_BE_REPLACED