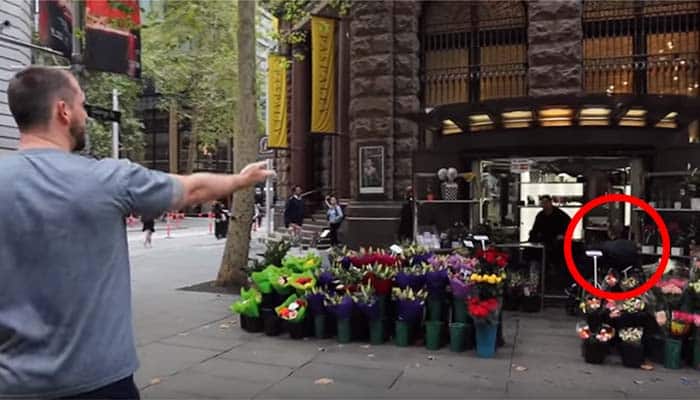 A Christian extremist has been blasted online for telling a man in a wheelchair that he is “going to hell.”

In the viral clip, Blair can be seen preaching in the city’s central business district. The horrifying moment occurs just as he approaches a florist, and spots the passerby in a wheelchair.

Blair can be heard yelling: “You’re in a wheelchair.

“God can touch you but you’re too bitter to ask.”

Charming. Fortunately, the florist came to the man’s assistance, shouting back:

“He can’t walk, alright?’ You keep yelling and screaming for no reason – no one cares!”

Sadly, this didn’t stop Blair, who responded with:

“There is a reason, people are going to hell.”

Then the florist, probably noticing the man was bonkers, just said: “That’s ok.”

Blair then wanders off, until he is challenged by a local tradesman also defending the wheelchair-user.

“You’ve just slated the man for being in the wheelchair, and you’re talking about people going to hell?

“Well you’re going to hell for saying that about him.”

Seems logical, but then Blair tries to respond by telling the guy that he loves him.

To which the tradesman says: “No you don’t, you don’t know me… idiot.”

Watch the bizarre exchange firsthand in the video below (2:30 seconds in).

Dog Pushes His Handicapped Owner’s Wheelchair Wherever They Go, Prepare Your Kleenex

For anyone wondering who this MyPillow guy is, this article will tell you all about him and his role in Trump’s last struggle for power. It is almost second nature for the internet to find humor in many serious events in government. Could this be this generation’s way of coping? We don’t really know. Let’s… END_OF_DOCUMENT_TOKEN_TO_BE_REPLACED

Trump is the First American President who gets impeached for the second time. Trump’s second impeachment became a trending topic on Twitter after the terrifying terrorist attack on Capitol Hill on the 6th of January. Twitter is at it again, being flooded with memes and Twitter jokes surrounding Trump’s second impeachment trial. Americans are trying to… END_OF_DOCUMENT_TOKEN_TO_BE_REPLACED