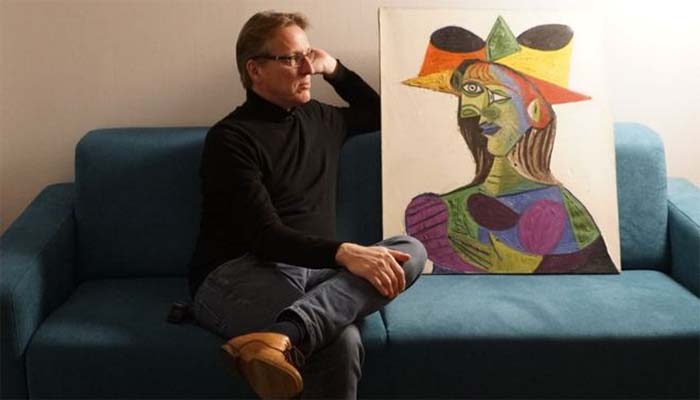 In March 1999, the Buste de Femme (Dora Maar) was stolen from the yacht of a Saudi Sheikh while moored in the port of Antibes, France.

The yacht was being renovated at the time, and one of the workers had moved the priceless artwork out of the highly-alarmed living room to an unguarded cabin. When the worker returned to the spot five days the later, the piece had vanished.

The 1938 oil painting depicts Dora Maar, a French photographer, painter and poet and the artist’s mistress for over a decade.

Instantly recognisable and completed in his iconic cubist style, the piece was part of the Picasso collection until the artist’s death in 1973.

Sold to the Sheikh by New York’s Palace Gallery for $4 million, the painting is now worth $20.5 million.

Arthur Brand, the sleuth who hunted down the stolen artwork, has garnered a reputation for his rougish ways. Last year, he uncovered a 6th-century Byzantine mosaic taken from a Cypriot church during the 70s. It was found in the care of the British royal family, who had no idea it was stolen.

Brand began searching for the Picasso after hearing rumours the piece was moving around the Dutch underworld. He later discovered the painting had been used a collateral in both the drug and arms trades.

He questioned contacts he believed may have purchased Buste de Femme (Dora Maar), or knew someone who did, and last month he finally located the legendary artwork.

The representives of a Dutch businessman approached Brand, claiming the Picasso had been obtained as a part of a payment deal. They bought the painting to him in Amsterdam, hidden by black plastic bags.

After the item’s origin was confirmed by a Pace Gallery expert, Brand handed the piece over to insurance company to determine what would happen next. However, no charges will be brought against the painting’s current owner.

It would seem that with less than three months left, 2020 still has surprises hidden in its sleeves. North Korean dictator Kim Jong Un, one of the most powerful men in the entire world, was recorded on international TV to shed tears while delivering a speech during a military event. Not only that, transcripts show… END_OF_DOCUMENT_TOKEN_TO_BE_REPLACED

Just recently, Trump and his family have contracted COVID-19 after excessively downplaying the disease and its symptoms since the pandemic began. Many people are alerted (both positively and negatively) by the development of the situation. Since the President rarely wears masks and does not support the wearing of masks, even after recovering from it, a… END_OF_DOCUMENT_TOKEN_TO_BE_REPLACED

Wayne Knight has revived his much-adored role of Newman, the nemesis of Jerry Seinfeld and postman, for a modern political ad. In the overhang of the US election on November 3, the sitcom actor emerged in an ad coordinated by Pacronym (a Democratic political action committee) in which he blasts President Trump‘s efforts to curtail… END_OF_DOCUMENT_TOKEN_TO_BE_REPLACED