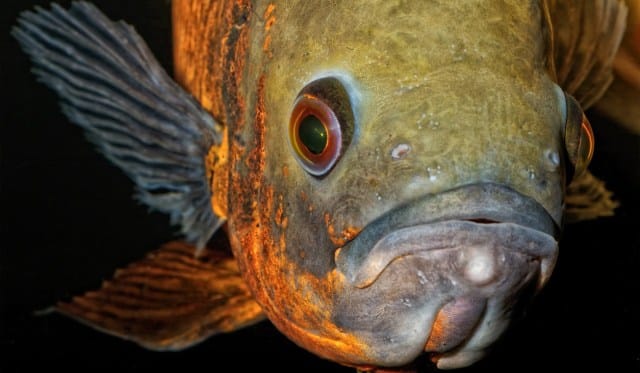 A fish is being nursed back to life after it was found forsaken, undernourished and living in an “deplorable” environment, which had provoked disease.

Authorities said last month the freshwater fish was uncovered in a vacated home in Wilmington, North Carolina. The former fish owner, who has been identified as Michael Ray Hinson, was placed under arrest on Thursday for three misdemeanor counts of animal cruelty. Hinson, who walked on a $4,000 bond, is set to appear in court Friday. It’s unconfirmed whether he has a lawyer in the case.

Lt. Jerry Brewer, a spokesman for the New Hanover County Sheriff’s Office, stated Hinson was evicted March 22nd from his Wilmington home. Three days afterwards, deputies arrived to check on the home and found a fish tank swimming in “deplorable” condition, Brewer noted. He explained the oscar that was dwelling inside it was in poor health; it was later reported the fish had hole-in-the-head disease, which is caused widely by a parasite.

Authorities transported the pet to the Fish Room, a Wilmington aquarium, where employees have been reviving it. Fish Room employee Ethan Lane said that when the oscar was brought in, “he was in pretty bad shape.” “Hole in the head is a parasite that starts in the intestines and works from the inside out, slowly killing the fish,” he explained. Lane told reporters that the fish is being treated with medication and has since been placed on a proper diet. He too said that the pet is thought to have survived in its former home by consuming cockroaches that fell into the tank, yet police have not confirmed the theory.