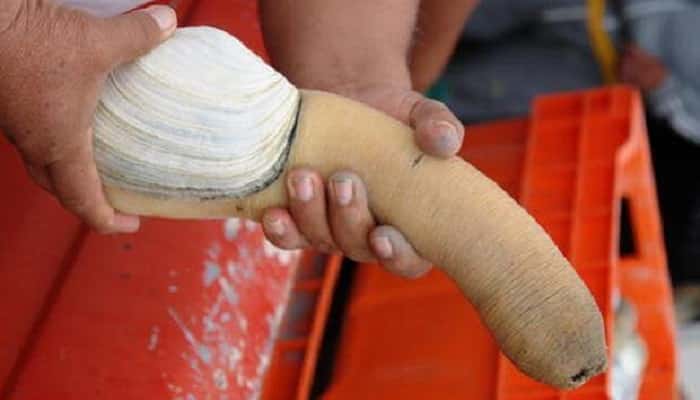 The depths of the ocean are a scary place, mainly because it’s a place where the sun can barely shine. As we all know, freaky <ahem> things tend to happen whenever there is a lack of light <wink>. One of them was even discovered just recently by scientists: another PG-13 clam– it’s penis-shaped and goes crazy for wood… literal wood, you dirty…

The said deep ocean dwellers are basically known as wood-boring clams with the scientific names Abditoconus, Spiniapex, & . They’re actually more special than they appear as they’re one of the few creatures on Earth who can actually eat wood. Apart from that, what caught the attention of the researchers was a protruding appendage which is not a sex organ. It’s penis-shaped, but it actually allows them to breathe:

The discovery of such creatures in the deep sea is credited to an international team of scientists led by Janet Voight, a curator of invertebrate zoology at the Field Museum in Chicago. Voight’s team also concluded that there’s actually a lot more of these penis-shaped wood-boring clams than what we all initially thought. Here’s one of them in a relaxed state:

“There’s not just one tree-cleaner-upper in the ocean, they’re really diverse. We’ve now found that there are six different groups, called genera, and around 60 different species,” explained Voight. Of course, their purpose is a lot more than just existing. In fact, they help the oceans immensely for their ability to decompose wood that winds up on the ocean floors.

Basically, we now know that there are penis-shaped clams that clean up our wood.

WTF of the Day: Men From Thailand are Having Their Penises Whitened