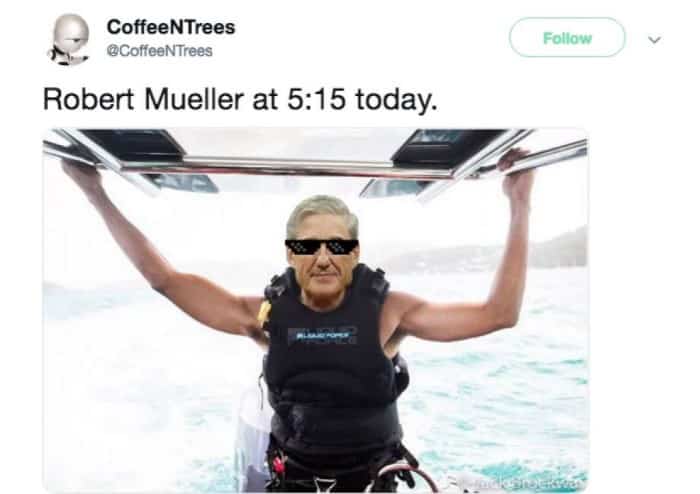 It took him two years, but Robert Mueller has finally completed his investigation into possible collusion between Donald Trump and the Russians, but an ending to this madness is still no where in sight. While the report summary written by Attorney General William P. Barr has found no evidence of Russian interference in Trump’s campaign, the president certainly hasn’t be exonerated despite what his tweets may say lately. So, as we all patiently wait for the full report to be leaked or published, people have taken to Twitter to help pass the time and some of these tweets are just too funny not to share!

Mueller’s investigation may have taken much longer than people expected, but to be fair the guy was looking into something that is kind of important. That didn’t stop people from making jokes about some of the reasons that may have delayed the process.

Sounds like every single college student on the night before a midterm paper is due as they wait for the Adderall to kick in.

Can’t you picture Mueller typing up his report at 30 words per minute using just his index fingers?

This takes me back to my college days…

George R.R. Martin just read this tweet and killed off another beloved character.

The real reason Mueller’s report hasn’t been released to the public yet is that there isn’t a file server in existence that’s large enough to handle it.

On Mueller’s Reaction To Finishing His Report

Twitter is full of ways in which people are predicting how Mueller will be celebrating the completion of his report. Will he have a few drinks? Will he take a three-day nap? Only Mueller knows!

I know I would!

Most of us know how truly satisfying that feeling is.

Yea, I can totally see him as a reality buff.

On Interpreting The Report

Are we actually going to read the report in its entirety? No. Unless someone’s paying you to read the report from start to finish and write a summary on it, you’ll be reading the bullet points with the rest of us. Or, you can use one of these unique ways Twitter-users have come up with to interpret content.

It’s the collusion reveal we’ve all been waiting for!

It’s the Mueller report featuring all of his unwanted insights into pop culture.

They should release it in a series of tweets. At least then people will read some of it.

The perfect explanation of how all of Trump’s supporters have reacted to the release of Barr’s letter. They don’t even need to see the report.

Yeah, that seems to fit with the theme of Trump’s presidency so far.

It’s safe to say that even though Mueller’s investigation took two years, expectations are pretty low. If he found anything worth reading, it would be all over the news and Trump would be behind bars…right? According to the summary, there is evidence that the Russians successfully interfered with the election by hacking into computers and through the use of social media, which we already knew. It also states that the full report describes all of Trump’s actions that have been considered obstruction and offers evidence on both sides, but doesn’t come to any conclusions. He’s not guilty, but he’s guilty either. It took them two years to figure that out.

Well, in Mueller’s defense, he probably doesn’t expect anyone to read the report in entirety.

We’re so fortunate to live in a country where people aren’t gullible enough to believe everything they read on the internet! Oh, wait…

That’s not true! He’s at home right now furiously typing, playing with the document’s font size and margins in an attempt to make it meet Congress’ minimum page requirements.

Hey, Mueller is just keeping in line with the trends set forth by Trump’s presidency!

It would be shocking if the investigation report didn’t include evidence of Trump’s natural hairline and average-sized hands.

Some of the best tweets to come out after the news broke that Mueller completed his report are those predicting what Trump’s response would be. Hilariously accurate, it’s SAD just how close some of these tweets come to the real thing.

At least Trump will be able to use his extensive time in prison learning how to read!

Of course, like the good little minions they are, Trump’s supporters will follow suit and miraculously forget how to read as well when the full report comes out.

Trump didn’t even wait for FOX news to analyze Mueller’s report for making his “NO COLLUSION” claims.

We all know that Trump didn’t actually read the summary of Mueller’s report as it’s four whole pages long, but someone must have told him what it said…right? Apparently, the president thinks that since no conclusion has been made yet that he’s been completely exonerated. Either he’s a moron or he received a different letter from Barr than the rest of us did.

That’s it, keep saying it and maybe you’ll be able to speak it into truth.

Who’s unhinged? This sounds like a lot of lies.

Only time will tell if Trump’s tweets jumped the gun!

Gift-giving isn’t just a seasonal affair between friends, families and acquaintances. The art of gift-giving is also conducted on a national scale with countries often sending each other big, weird and expensive gifts. Experts in all things gifts, Vanilla Reindeer put together some examples of these expensive and odd gifts that have been shared between… END_OF_DOCUMENT_TOKEN_TO_BE_REPLACED

There are lots of ways you can make Pres. Trump feel welcome: you can offer him coffee, or mow a penis into a field for him to view as his plane lands. The willie in question has been chopped by Born Eco ahead of the arrival of President Trump, who visited the UK Monday for… END_OF_DOCUMENT_TOKEN_TO_BE_REPLACED

The year isn’t even halfway over, yet Donald Trump has managed to make a fool of himself and our country countless times. From inviting the national college football champions, the Clemson Tigers, all the way to the White House for some McDonald’s to his to the dreaded results of Mueller’s investigation, it has been one… END_OF_DOCUMENT_TOKEN_TO_BE_REPLACED

Republicans have always said that when they gained control in Congress, they would work to overturn Roe v. Wade and here they are, cashing in on that promise one state at a time. So far, Alabama, Arkansas, Georgia, Kentucky, Missouri, and Ohio have all passed incredibly restrictive laws on abortions, making it illegal for women… END_OF_DOCUMENT_TOKEN_TO_BE_REPLACED

If you’re on Snapchat, then you’ve probably played around with (and were likely horrified by) their filter gender swap filters. While you’re probably using these filters to send hilarious pics to your friends, some guys using them to create Tinder profiles. What likely started out as a joke has quickly evolved, and these guys are… END_OF_DOCUMENT_TOKEN_TO_BE_REPLACED

“Milkshaking” is a hilarious trend in Britain where a milkshake is thrown at and ideally lands on a far-right politician or activist. The point of this nonviolence protest is to humiliate them without causing injury. Physical injury at least. There’s no doubt that milkshaking has led to a few bruised egos. Not only is this… END_OF_DOCUMENT_TOKEN_TO_BE_REPLACED