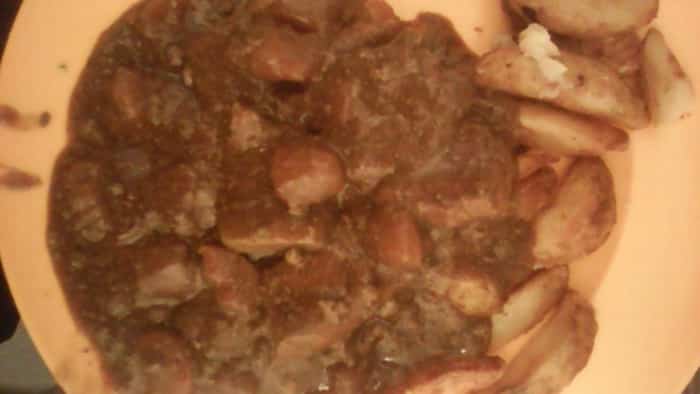 An inmate has been snapping photos of his prison meals and forwarding them to a newspaper, alleging they are ‘worse than dog food’.

The unidentified man, who is locked down in category C HMP Risley, sent a plethora of images to the Manchester Evening News illustrating a range of meals including pizza, fish and chips, and (something that appears to be) meat patties.

He informed the news outlet he would ‘rather starve’ than consume the grub and states it’s worse than what might be fed to a domestic pet. The pictures – which must have been snapped and shared with a smuggled-in, illegal, phone – highlight an exhibit of rather dismal-looking meals, featuring chips more often than not.

One photograph displays an interesting combo of beans, pasta and chicken burgers; another features beans, pizza, and chips, and a third meal boasts chips and chopped liver. The Ministry of Justice was sent the images and responded by saying all meals furnished in the prison meet ‘nutritional guidelines’.

A prison spokesperson said in a statement: “All prisoners are offered fruit and vegetables as part of three healthy meals a day, which meet nutritional guidelines set out by the Food Standards Agency and the Department of Health. We are investigating these pictures and any prisoner found using a mobile can face extra time behind bars.” Accordant to the latest estimates from the Ministry of Justice, $1.31 is allotted to feed each inmate per day.

The world is devastated by the news that Britain’s Prince Philip, the Duke of Edinburgh, has died at the age of 99. Palace media confirms that the Duke has expired mid-day today, April 9th. The announcement did not contain any specifics on the cause of death. The United Kingdom will enter a state of national… END_OF_DOCUMENT_TOKEN_TO_BE_REPLACED

Who would have known that religious prophets would be among the most loyal supporters of former President Trump? In fact, it has been observed that the most conservative Christians may have been the right amount of push for Trump’s presidential win back in 2016. Since Trump’s election back in 2016, numerous self-proclaimed “prophets” have been… END_OF_DOCUMENT_TOKEN_TO_BE_REPLACED

President Biden falls and slips multiple times on the Airforce One Steps and PEOPLE ARE GOING CRAZY! What’s the big deal? Some people are hating, while others are making memes just for the fun of it. We are all human, aren’t we? Everyone’s expected to stumble some time in their lives. However, with the internet… END_OF_DOCUMENT_TOKEN_TO_BE_REPLACED