Remember when Facebook debuted “Pirate” as a language option a few years back? Now Twitter has a “LOLcats” language option, which some tech sites see as an obvious move to position the company towards a planned 2014 IPO.

Why would you want LOLcats translation? Because it’s fun. And it’s as simple as finding it in the language drop-box under settings. We’ll use my profile as a guinea pig: 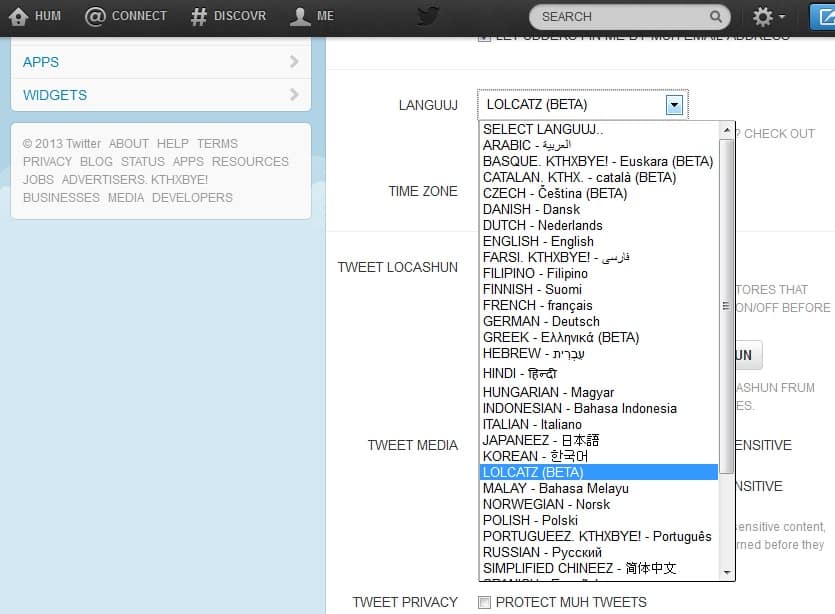 TechCrunch sees the LOLcats language option as part of Twitter’s continuing effort to follow in Facebook’s footsteps and take the company public.
Previously, they allowed for employee liquidity with a couple of tender offers, and launched a video option with Vine, which was acquired aggressively by Jack Dorsey last year. Twitter also recently picked up TV analytics startup Bluefin Labs in their continuing effort to push video content.

Twitter is on track for a huge public debut, with a recent valuation of $9 billion, with shares falling somewhere between $17 and $20 a share, depending on who’s valuing them. There’s also a rumor afoot that Twitter expects roughly $1 billion in revenue by the end of 2013.

IPO could come around this time next year. Twitter’s top-dog CEO Dick Costolo told the Wall Street Journal recently that “making Twitter more understandable to newcomers so the service can crack one billion users” was the company’s primary goal for now.

So maybe one-billion users is the IPO magic number. We can’t say for sure. In any case, you can check out the new LOLcats language option under the “settings” button when you log in to your Twitter profile. Or save yourself some time and check out our gallery below: