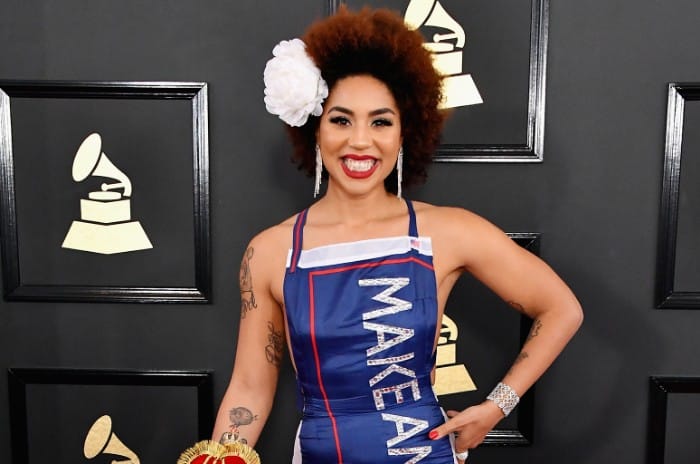 In addition to creating an enormous divide in our country, Donald Trump’s reign as our presidential dictator has inspired some seriously heinous fashion statements. Some people choose to march with signs to express their political beliefs while others show their support with their wardrobe choices. Regardless of whether their ideas align with the left or the right side of the political spectrum, it’s safe to say that the minds behind these fashion statements took it a tad too far. Here are some of the worst fashion statements made in Trump’s America.

For some reason, singer Joy Villa thinks walking the red carpet at the Grammys in a gown addressing some of the most controversial issues in support of Donald Trump is a good idea. Her “Build the Wall” dress was worn in 2019 and was probably the least horrendous gown she had commissioned over the years. Created by Desi Designs Couture, the designer felt the need to publish a disclaimer in regards to this particular dress saying, “DISCLAIMER: The views, thoughts, and opinions expressed by my clients are not necessarily the same as my views, thoughts, and opinions.”

In 2018, Villa wore what could only be a second-hand wedding gown found at Goodwill with a handpainted fetus on in. Paired with a “choose life” purse and enormous tiara, the whole thing looks like an elementary school art project. This wardrobe trend is obviously a ploy to get the media’s attention and give Villa’s career a boost. It was cute the first time around, but it’s kind of getting old.

It seems that the whole concept of making a political statement on the red carpet has become a trend. Singer Ricky Rebel followed in Villa’s footsteps and wore this hideous “Keep America Great” jacket to the 2019 Grammys. If this didn’t help to boost albulm sales, he could probably sell that jacket to any of the numerous museums that will open in the near future depicting Trump’s dictatorship .

While the messages depicted in Ashish’s London fashion show are on point, the clothes are just, well, wrong. Between the glitter and patterns, it looks like something the cast of Jersey Shore would wear in the ’70s.

Maybe if everything wasn’t so sparkly….

Jeremy Scott is getting models ready for the resistance with these comic-like embellishments placed on his clothes that scream words like sex, revolt, peace, and shock. While some of the clothes incorporate the words into the fabric design, many of them look like the terms were thrown on with some scotch tape moments before the model walked down the runway.

Trump’s presidency hasn’t just leaked onto the red carpets and fashion runways. People are actually making their own fashion disasters at home as well. “Someone should tell crazy that owning a hot glue gun does not make you a hot purse designer.”

While it can be adorable when it’s done right, this dress is not an example of this.

6 Insane Videos Of Fights Between Liberals And Conservatives

Gift-giving isn’t just a seasonal affair between friends, families and acquaintances. The art of gift-giving is also conducted on a national scale with countries often sending each other big, weird and expensive gifts. Experts in all things gifts, Vanilla Reindeer put together some examples of these expensive and odd gifts that have been shared between… END_OF_DOCUMENT_TOKEN_TO_BE_REPLACED

There are lots of ways you can make Pres. Trump feel welcome: you can offer him coffee, or mow a penis into a field for him to view as his plane lands. The willie in question has been chopped by Born Eco ahead of the arrival of President Trump, who visited the UK Monday for… END_OF_DOCUMENT_TOKEN_TO_BE_REPLACED

The year isn’t even halfway over, yet Donald Trump has managed to make a fool of himself and our country countless times. From inviting the national college football champions, the Clemson Tigers, all the way to the White House for some McDonald’s to his to the dreaded results of Mueller’s investigation, it has been one… END_OF_DOCUMENT_TOKEN_TO_BE_REPLACED

Republicans have always said that when they gained control in Congress, they would work to overturn Roe v. Wade and here they are, cashing in on that promise one state at a time. So far, Alabama, Arkansas, Georgia, Kentucky, Missouri, and Ohio have all passed incredibly restrictive laws on abortions, making it illegal for women… END_OF_DOCUMENT_TOKEN_TO_BE_REPLACED

If you’re on Snapchat, then you’ve probably played around with (and were likely horrified by) their filter gender swap filters. While you’re probably using these filters to send hilarious pics to your friends, some guys using them to create Tinder profiles. What likely started out as a joke has quickly evolved, and these guys are… END_OF_DOCUMENT_TOKEN_TO_BE_REPLACED

“Milkshaking” is a hilarious trend in Britain where a milkshake is thrown at and ideally lands on a far-right politician or activist. The point of this nonviolence protest is to humiliate them without causing injury. Physical injury at least. There’s no doubt that milkshaking has led to a few bruised egos. Not only is this… END_OF_DOCUMENT_TOKEN_TO_BE_REPLACED