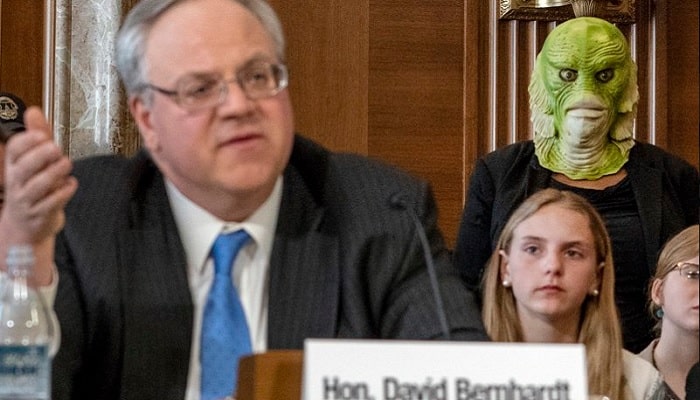 Time and again, politicians always fail to deliver on their platform promises– it has even become a norm for them to disappoint, sadly. Still, that doesn’t mean protests should stop, if anything, they should be intensified. That’s exactly what happened to one former oil lobbyist’s hearing, where a “swamp monster” even appeared in the courtroom as a form of protest against pollution.

David Bernhardt is about to become the Interior Secretary, he is a well-known Trump Interior nominee and the problem is, he was a former oil and gas lobbyist. This means him becoming Interior Secretary gives him access to the public lands and waters that he wanted as an oil & gas lobbyist as worded by environmental welfare organization Greenpeace.

Hence, during Bernhardt’s confirmation hearing, a confounding squad of protesters appeared in the courtroom: swamp monsters. A swamp monster appeared and was even caught on camera sitting among the regular audience. Here’s the video of the incident where it can be seen shuffling around during the hearing:

The moment when Capitol Police notice the swamp monster sitting behind oil lobbyist David Bernhardt is too much 😂 pic.twitter.com/0WNuuRKhWW

As you might have guessed, they’re not Southerners from the swamp monster kingdom called of Louisiana. They’re just masked Greenpeace activists who went in the courtroom to protest what swamp monsters would have had they existed: the pollution brought about by oil and gas companies to public lands. Here’s Greenpeace’s official post about the protest:

(1) So why did we bring these swamp creatures to David Bernhardt's confirmation hearing for Interior Secretary this morning? Well… Bernhardt is a former oil and gas lobbyist who previously worked to help corporate polluters get their hands on public lands. pic.twitter.com/TrnqkhFQUv

(3) Trump campaigned hard on the idea of “draining the swamp”. As we know, he's done the exact opposite — and Bernhardt might be the most blatant example of that. https://t.co/IIS49vAMBB

Apparently, Greenpeace picked the swamp monster because it was inspired by Trump’s election promise to “drain the swamp.” The activists claim that he and his cabinet are doing the exact opposite of that promise. Unfortunately, the swamp monster was asked to leave the hearing after being spotted by the police which clearly violates the swamp monster’s rights for freedom of expression.

How did he die? An African American man, George Floyd, 46, was killed by Minneapolis Police officers. Floyd was being investigated for forgery. George Floyd’s death was caused by a police officer holding him down on the ground with a knee on his neck. He was not shot to death but instead strangulated. Now, his family… END_OF_DOCUMENT_TOKEN_TO_BE_REPLACED

The Blood Test, The Swab Test, and The Saliva Test      Essentially, there are three general types of COVID-19 testing produced so far. One is the rapid test, the second is the saliva test and the other is the swab test. The rapid test (also known as the anti-body test) uses blood samples. The swab test… END_OF_DOCUMENT_TOKEN_TO_BE_REPLACED

The COVID-19 pandemic is one of the biggest modern pandemics known in history. Currently, there are more than five million confirmed cases in the world, with a total of 333,000 deaths. A total of 1.6 million of these confirmed cases are in the US alone. The world is currently in a race of finding a… END_OF_DOCUMENT_TOKEN_TO_BE_REPLACED

Despite concrete data and research, people’s opinions will always be diverse when it comes to a variety of topics including religion, politics, gender, and more. Denial is a common reaction to many important discussions and serious world events. The COVID-19 pandemic does not differ from any issues and is subject to opinions from critiques all… END_OF_DOCUMENT_TOKEN_TO_BE_REPLACED

Back in January, when the Wuhan, China coronavirus broke out, it didn’t make it to the front page of newspapers, in print or virtual form. Today, January feels like a lifetime away. Like it or not, people around the world have adapted to the new normal – staying at home, frequent hand washing, and social… END_OF_DOCUMENT_TOKEN_TO_BE_REPLACED

Since the beginning of the year 2020, the whole world has been stupefied by the rapid spread of a deadly coronavirus known as COVID-19. World superpowers in the West were unable to prevent the virus from reaching their borders. Because of this fact, the novel coronavirus COVID-19 became a world-wide pandemic no less than three… END_OF_DOCUMENT_TOKEN_TO_BE_REPLACED