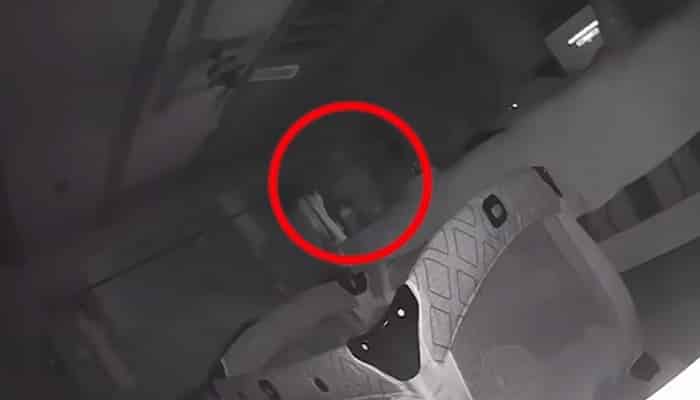 It can be puzzling why horror filmmakers love to designate babies and the nanny cam as a target and premise for spooks. It could be that child-rearing is that scary. Still, something like that probably happens in real life too; such a horrific predicament was even allegedly caught on a nanny cam after a couple’s baby turned up with some weird scratches.

The couple could have easily ignored those noises, but the straw that broke the camel’s back was when their infant baby turned up with odd deep, purple scratches across her face. So, the couple decided to install a nanny cam on their baby’s room for security. However, the supposed culprit did not appear to be a living thing… or a physical one at all:

It appears to be a fleeting humanoid shape zooming past the baby’s crib. It even caught the attention of the baby who stood up to check it out. Heather was certain that it was a poltergeist who harmed her baby, “This is a spirit — I don’t know what its intentions but at this point, it’s becoming physically harmful.”

The couple even suspected that the said spirit could have been the elderly woman who had lived there a few years before they moved in. The elderly woman actually fell off the stairs, died in the house and laid at the bottom of the stair for days until someone found her corpse. Apart from that, the elderly woman’s “schizophrenic” brother also moved in afterward only to die sometime later.

The couple did bring in a paranormal investigator who claimed that the house was indeed, haunted. Hence, Heather and Josh are now in the market for a new house so they can get away from the haunted one. Hopefully, it’s not their child who’s haunted.

Presidential pardons are one and many in the history of the US. There are many times when US Presidents granted reprieves for their citizen’s misdeeds. The US President may grant a pardon for any individual, including himself, for any crimes done against the country and its citizens. This issue of Presidential pardons has been trending… END_OF_DOCUMENT_TOKEN_TO_BE_REPLACED

President Biden has tapped Rachel Levine to be his assistant secretary of health, making her the first publicly transgender federal official. In 2017, Democratic Gov. Tom Wolf appointed Levine to her current post, making her one of the few transgender persons serving in appointed or elected positions countrywide. Biden said in a statement: “Dr. Rachel… END_OF_DOCUMENT_TOKEN_TO_BE_REPLACED

The minimum wage hike has always been an issue in the US for the past decades. With only a few hours before Biden gets inaugurated as the President of the United States, people are excited for all his promises to take place. One of these is his plans to raise the minimum wage of workers… END_OF_DOCUMENT_TOKEN_TO_BE_REPLACED