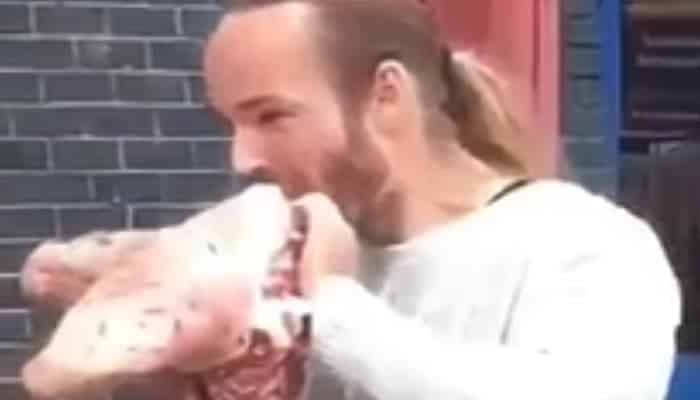 A man so infuriated by people leading a meat-free lifestyle purchased a pig’s head and ate it raw outside of a vegan food festival.

Accordant to reporters, the chap was faced by animal rights group Direct Action Everywhere – who were carrying signs which bared slogans like ‘it’s not food, it’s violence’ and ‘meat is murder’ penned on them.

Vegfest manager, Tim Barford, stated: “We knew about the planned protest and were expecting 30 protestors – three turned up, which was slightly sad for them and reminiscent of a Nigel Farage march. But they proceeded to upset kids and members of the public, and with that in mind, the police arrived, gave them a warning and sent them packing.

“What was interesting was that we had meat-eating members of the public saying that this revolting spectacle had encouraged them to give up eating meat – so it seems the anti vegan protest actually encouraged people to go vegan.”

A DxE Brighton member furthered: “A lot of everyday people walking past are also repulsed by the sight of a pig’s head which is interesting as most of these people eat pigs as well. It goes to show what we already know, that people don’t like seeing the faces of the animals they eat. Eating animals is eating a product of torture and death. Why is animal abuse so normalized when it’s in a burger but shocking when we see the being behind the burger?”

A DxE organizer too commented, expressing: “We live in such a speciesist society we often forget who we are eating and I think today serves as a very visual reminder of the victims behind our choices.

“We call ourselves an animal loving nation but our actions don’t reflect that as most people eat and wear animals every day. Over 10 million pigs are killed a year in UK slaughterhouses, they are usually killed at just five to six months old. There’s nothing just about what we do to animals and no humane way to exploit and take their lives.”