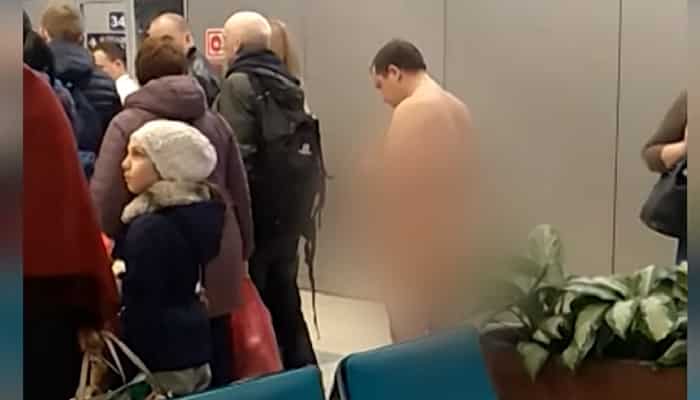 We usually shouldn’t judge or shun people with crazy ideas, as long as they are safe. After all, those ideas could blossom into the next big contribution to society. However, one Russian man had an idea so crazy, it will probably discourage aliens from visiting us for at least a few more centuries– he took off his clothes at the airport because they make him less aerodynamic.

The would-be passengers waiting at Moscow’s Domodedovo Airport were in for quite a surprise last Saturday. While they were lining up to board a plane headed for Simferopol in Crimea, one Russian man in line was ahead of his time. He took off his clothes– all of them. While butt-naked, he went up to the line for the departing plane as a regular person would. Here’s the video:

Of course, he wasn’t always like this, he actually entered the airport fully clothed but like a modern day Da Vinci, he had a glimpse of the future. Too bad other people do not share the same… enthusiasm as the said man. So, the police went in and arrested him, he was also handcuffed while naked and detained before he could reach the plane.

No one knew what the Russian man had in mind when he stripped naked but one of the witnesses claimed that “He shouted that he was naked because clothing impairs the aerodynamics of the body. He flies with more agility when undressed.” Some witnesses also claimed that he does not appear to be under the influence of alcohol.

Still, he was taken to the airport’s medical bay and eventually, to a hospital where will undergo a mental health examination. It’s not clear whether he got a ticket refund… or if he had a ticket at all.

Now that the election results are almost final, we all want to ask what’s going to happen to Donald Trump after leaving the office? All US Presidents inevitably reach the point where they leave the White House.  Besides, the constitution states that all US Presidents are subject to a two-term limit. What do former presidents… END_OF_DOCUMENT_TOKEN_TO_BE_REPLACED

This is the first time in modern history that the US held presidential elections in the middle of a pandemic. In truth, the US elections may have overshadowed COVID-19 and the side effects are limitless. America is facing a tough crisis of discontentment with the current administration. An understandable case but a situation that may… END_OF_DOCUMENT_TOKEN_TO_BE_REPLACED

America’s political climate has been seeing records of changes over the past few decades. However, US election results record a list of surprising firsts for the first time in a long time. With the power of the youth overpowering the US election results, we see how differently they see the world. It shows how inclusivity… END_OF_DOCUMENT_TOKEN_TO_BE_REPLACED