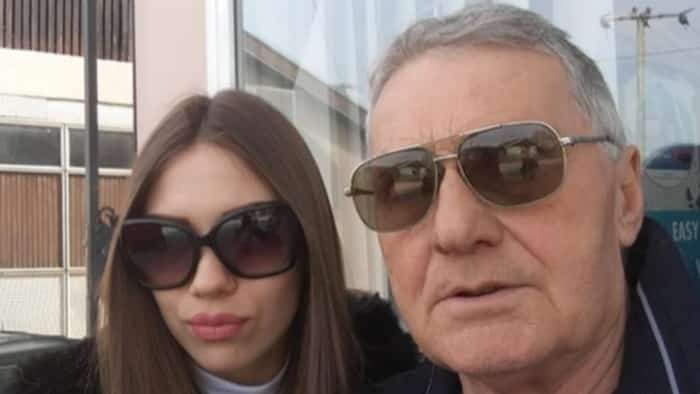 A 21-year-old woman has publicly addressed her age-gap relationship, claiming she has sex ‘almost every day’ with her fiancé who’s 74 years old.

Milojko ‘Mikan’ Božić and Milijana Bogdanović state that their Pilatovići village neighbors, are baffled by their relationship though contend that it works for them and they’re contemplating even starting a family.

In December, Milojko underwent heart-surgery, however according to Milijana this hasn’t slowed down her beau and the item have sex most days, without Viagra even! “We have sex almost every day, I don’t see what is strange with that. But since Mikan had his heart operation, I have to go easy on him in bed,” said Milijana.

“But he is like a young man when it comes to sex, he doesn’t need Viagra. Although, I don’t know much about younger men, as I’ve always been with men older than me. I don’t like young guys, I’ve liked older men since forever.

“For his years, he looks perfect. I don’t care what other people think and say. I’ve known Mikan all my life – my neighbors and I used to help him when he was sick. That’s when our love was born.”

Meanwhile, enamored Milojko furthered: “I was attracted to her kindness and beauty. Who doesn’t like younger? It’s more sexy of course, kissing and everything else. I’ve known her since she was little, but I hadn’t thought of anything like that. When she was growing up, we spent time together but nothing more.”

Milojko is a father to three children – aged 30, 35 and 40 – and has two grandchildren, aged 11 and 13. The happy pair plan to get married at a registry office on September 7th, because their local church will not wed persons who have an age gap of more than 15 years. As for Milijana’s parents, they disapprove of the relationship, informing her that they’re disappointed in her partner choice.

Instead Of Vows, Bride Reads Received Screenshots Of Fiancé’s Affair!

The US arms sale industry is large and successful. More than 30% of exported weapons in the world come from the United States. They supply to no less than 90 nations making it one of the largest suppliers of weapons in the world. The US makes an estimate of almost 200 Billion dollars in annual… END_OF_DOCUMENT_TOKEN_TO_BE_REPLACED

Now that the election results are almost final, we all want to ask what’s going to happen to Donald Trump after leaving the office? All US Presidents inevitably reach the point where they leave the White House.  Besides, the constitution states that all US Presidents are subject to a two-term limit. What do former presidents… END_OF_DOCUMENT_TOKEN_TO_BE_REPLACED

This is the first time in modern history that the US held presidential elections in the middle of a pandemic. In truth, the US elections may have overshadowed COVID-19 and the side effects are limitless. America is facing a tough crisis of discontentment with the current administration. An understandable case but a situation that may… END_OF_DOCUMENT_TOKEN_TO_BE_REPLACED