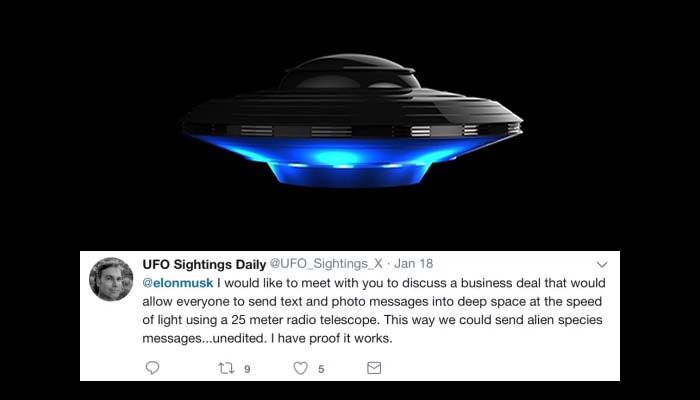 But it turns out Waring is hoping to grab the attention of one man in particular – Elon Musk.

The UFO fanatic made a name for himself online with the claim there is evidence of extraterrestial life hidden in NASA images and videos.

Examples shared on his website, UFO Sightings Daily, include everything from “space crabs on Mars” to UFO crashes in Russia. There’s also a whole section dedicated to buildings on the moon, and an in-depth description of a supposed alien sighting by John Lennon.

In the past, Waring has sent his “findings” to the UN, with little success, and is now barraging Elon Musk with messages instead.

Unfortunately for Waring, the tech billionaire and creator of SpaceX doesn’t seem to be interested, and has been publically ignoring the Ufologist’s tweets.

Waring’s latest pursuit in getting the Tesla founder’s attention was discovered by the account UFO of Interest, which tweeted that he was “making a fool of himself.” Ouch.

And it looks as though this isn’t Waring’s first attempt to make contact with Musk, with evidence the writer has been tweeting at the 47-year-old for months.

In his most recent tweet to Musk, Waring said: “‘I found this 10-mile long alien ship in Waterman crater on Earth’s moon.

“Can you imagine all advanced tech on board? Looks like Voyager but it’s real. Get this ship and it will take humans across the universe. Oh…and I found others.”

He also included a link to an article he’d penned on the subject.

Last month, Waring wrote to Musk: ” I would like to meet with you to discuss a business deal that would allow everyone to send text and photo messages into deep space at the speed of light using a 25-metre radio telescope.

“This way we could send alien species messages…unedited. I have proof it works.”

Although Waring may have failed at getting Musk onboard, he claims his research has been shared by 50,000 news sites across the globe.

Still, we somehow find it hard to believe that reptiles on Mars are a thing.

The Arecibo Messages Marks 44 Years of Aliens Ignoring Us

Strange Threat Looms Over Space Station, But It’s Not Aliens Or Asteroids

How did he die? An African American man, George Floyd, 46, was killed by Minneapolis Police officers. Floyd was being investigated for forgery. George Floyd’s death was caused by a police officer holding him down on the ground with a knee on his neck. He was not shot to death but instead strangulated. Now, his family… END_OF_DOCUMENT_TOKEN_TO_BE_REPLACED

The Blood Test, The Swab Test, and The Saliva Test      Essentially, there are three general types of COVID-19 testing produced so far. One is the rapid test, the second is the saliva test and the other is the swab test. The rapid test (also known as the anti-body test) uses blood samples. The swab test… END_OF_DOCUMENT_TOKEN_TO_BE_REPLACED

The COVID-19 pandemic is one of the biggest modern pandemics known in history. Currently, there are more than five million confirmed cases in the world, with a total of 333,000 deaths. A total of 1.6 million of these confirmed cases are in the US alone. The world is currently in a race of finding a… END_OF_DOCUMENT_TOKEN_TO_BE_REPLACED

Despite concrete data and research, people’s opinions will always be diverse when it comes to a variety of topics including religion, politics, gender, and more. Denial is a common reaction to many important discussions and serious world events. The COVID-19 pandemic does not differ from any issues and is subject to opinions from critiques all… END_OF_DOCUMENT_TOKEN_TO_BE_REPLACED

Back in January, when the Wuhan, China coronavirus broke out, it didn’t make it to the front page of newspapers, in print or virtual form. Today, January feels like a lifetime away. Like it or not, people around the world have adapted to the new normal – staying at home, frequent hand washing, and social… END_OF_DOCUMENT_TOKEN_TO_BE_REPLACED

Since the beginning of the year 2020, the whole world has been stupefied by the rapid spread of a deadly coronavirus known as COVID-19. World superpowers in the West were unable to prevent the virus from reaching their borders. Because of this fact, the novel coronavirus COVID-19 became a world-wide pandemic no less than three… END_OF_DOCUMENT_TOKEN_TO_BE_REPLACED