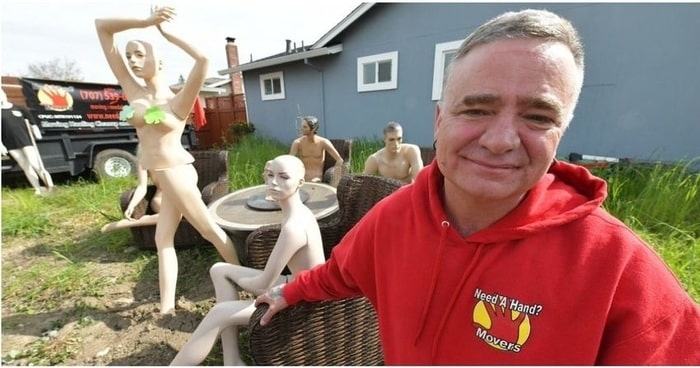 After a complaint, a man sized down his fence to 3-feet high, but then staged several mannequins to laze in the ‘buff’ on his patio furniture.

Jason Windus states he set up the freaky outdoor scene after a neighbor complained that his fence in the backyard was too high. Rather than receiving a visit from his neighbor to sort out a solution, Windus claims he was cited for a bylaw violation due to his 6-foot fence obstructing visibility by “blocking” a street corner.

Providing Windus refused to decrease his fence, the town cautioned he would receive a daily fine. “It’s very serious,” he told reporters regarding the warning. “They made me freak out. They wanted me to tear down my fence to see inside my yard. And now they get to.”

Before being inspired to throw his ‘fashion model’ garden party, the homeowner expressed that he originally kept the mannequins for target practice. To add insult to injury, Windus even “invited” his whiny neighbor by erecting a display for all eyes to see.

He too stresses that his neighbors have supported him and the mannequin soiree – well, at least everybody but the neighbor who drew the complaint.

While the homeowner is getting his retribution, he alleges he’s not satisfied with the adjusted, shorter fence, because it’s unable to keep his two large dogs in the yard and they’re confined now inside the house..

He prays that witnessing the mannequin fiesta day in and day out will push his neighbor to withdraw his complaint. “I’m waiting,” said Windus. “If they didn’t like the fence, how do they like this?”