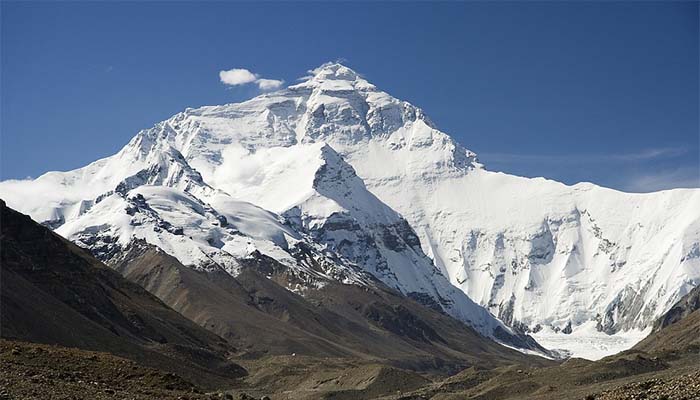 Climbing Mount Everest is a monumental feat for even the most experienced hikers, but it may still shock you to learn that almost 300 people have died while trying to make it to the top.

But if you thought those unfortunate climbers were resting peacefully on the mountain’s face, you’d be wrong again. Global warming is causing the glaciers on Everest to melt, uncovering the bodies of those who died while working their way up the highest peak in the world.

Ang Tshering Sherpa, former president of Nepal Mountaineering Association, explained: “We have brought down dead bodies of some mountaineers who died in recent years, but the old ones that remained buried are now coming out.”

The majority of the corpses have been popping up in an area known as the Khumbu Icefall, while others have appeared in a spot called South Coll.

But removing the bodies is not an easy task, particularly since law states that moving them requires intervention from Nepal’s government. It’s also an expensive process, with estimated costs of $80,000 to bring corpses down the mountain.

A government liason officer told the BBC: ““Hands and legs of dead bodies have appeared at the base camp as well in the last few years.

“We have noticed that the ice level at and around the base camp has been going down, and that is why the bodies are becoming exposed.”

But Everest isn’t the only mountain suffering the ill-effects of global warming, with many glaciers in the Himalayas thinning. While the movement of the Khumba Glacier is also exasperating matters.

Tshering Pandey Bhote, vice president of Nepal National Mountain Guides Association, added: “Because of the movement of the Khumbu Glacier, we do get to see dead bodies from time to time.

“But most climbers are mentally prepared to come across such a sight.”

Flat Earth Cruise Is Real And Is Set To Happen In 2020, Say Goodbye To Them

Together with the fireworks for the Independence Day weekend, the latest explosive Hollywood news involves no one else but the controversial Kanye West. The famous celebrity has revealed his plans for a presidential run. Originally planned for 2024, he has stated that he is actually going to run for the 2020 Presidential elections in November. The… END_OF_DOCUMENT_TOKEN_TO_BE_REPLACED

Recent trends have reported that K-pop fans in the US are getting mixed in with current issues in politics. K-pop fan communities are using online platforms to rally up and protest against racism in the United States. In support of the #BlackLivesMatter movement, the online K-pop community has come together in protest. Never has it… END_OF_DOCUMENT_TOKEN_TO_BE_REPLACED