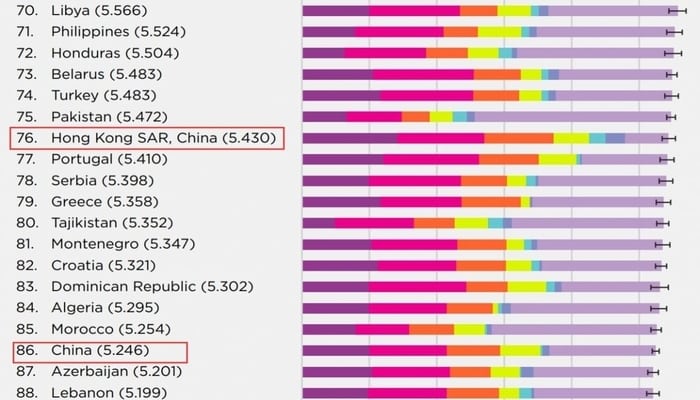 What’s the happiest country in the world? Well, the UN published its latest World Happiness Report, ranking 156 countries by how merry their citizens are.

The World Happiness Report is a momentous survey of the state of world happiness that ranks one hundred and fifty-six countries by how happy their citizens understand themselves to be. 2019’s World Happiness Report concentrates on felicity and the community: how bliss has developed over the past dozen years, with a centering on the social norms, technologies, crises and government policies that have impelled those changes.

What does it take to make us truly happy, though? Whatever it entails, northern Europe has solved the mystery. The newest World Happiness Report ranks 6 northern European countries in the top 10! The report ranks countries across six metrics: freedom, income, trust, healthy life expectancy, trust, generosity and social support.

What about the United States? Interestingly, the U.S. is ranked number 19, sandwiched between the Czech Republic and Belgium. More alarming though, the level of happiness in the U.S. has diminished massively since 2008. Over the past ten years survey data displays happiness plummeting in the U.S. by about the same amount as it has plunged in Afghanistan.

The U.S. isn’t the only big country that slipped further down the list. Germany hardly clipped the U.S. landing at number 17, Japan, which flaunts the second largest economy globally among the world’s democracies is down dramatically at number 58 and China is back even further at 93.

You can read the whole report, which dives deeper into the causes of our collective unhappiness and happiness at worldhappiness.report. In the meanwhile flights to Helsinki are priced pretty economical right now.

Need Company? This Video Chat Site Has Made A Lot Of People Happy

Gift-giving isn’t just a seasonal affair between friends, families and acquaintances. The art of gift-giving is also conducted on a national scale with countries often sending each other big, weird and expensive gifts. Experts in all things gifts, Vanilla Reindeer put together some examples of these expensive and odd gifts that have been shared between… END_OF_DOCUMENT_TOKEN_TO_BE_REPLACED

There are lots of ways you can make Pres. Trump feel welcome: you can offer him coffee, or mow a penis into a field for him to view as his plane lands. The willie in question has been chopped by Born Eco ahead of the arrival of President Trump, who visited the UK Monday for… END_OF_DOCUMENT_TOKEN_TO_BE_REPLACED

The year isn’t even halfway over, yet Donald Trump has managed to make a fool of himself and our country countless times. From inviting the national college football champions, the Clemson Tigers, all the way to the White House for some McDonald’s to his to the dreaded results of Mueller’s investigation, it has been one… END_OF_DOCUMENT_TOKEN_TO_BE_REPLACED

Republicans have always said that when they gained control in Congress, they would work to overturn Roe v. Wade and here they are, cashing in on that promise one state at a time. So far, Alabama, Arkansas, Georgia, Kentucky, Missouri, and Ohio have all passed incredibly restrictive laws on abortions, making it illegal for women… END_OF_DOCUMENT_TOKEN_TO_BE_REPLACED

If you’re on Snapchat, then you’ve probably played around with (and were likely horrified by) their filter gender swap filters. While you’re probably using these filters to send hilarious pics to your friends, some guys using them to create Tinder profiles. What likely started out as a joke has quickly evolved, and these guys are… END_OF_DOCUMENT_TOKEN_TO_BE_REPLACED

“Milkshaking” is a hilarious trend in Britain where a milkshake is thrown at and ideally lands on a far-right politician or activist. The point of this nonviolence protest is to humiliate them without causing injury. Physical injury at least. There’s no doubt that milkshaking has led to a few bruised egos. Not only is this… END_OF_DOCUMENT_TOKEN_TO_BE_REPLACED