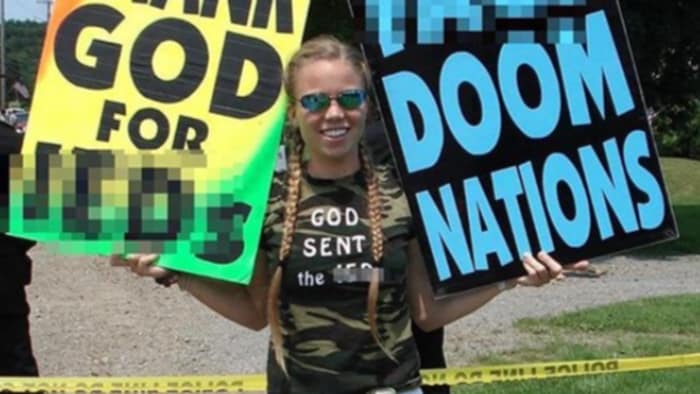 After being banished from the Westboro Baptist Church, Lauren Drain has ‘stuck it’ to her associates by becoming an anti-hate campaigner and IG model.

In a heartfelt Instagram post, Drain describes how she was brainwashed as a teenager by the flagitious ideology of the Westboro Baptist Church. The organization were accountable for picketing funerals of soldiers and such. Delightful bunch.

Posting on Instagram, Lauren explained: “Yes, that’s a younger me standing on the American flag & holding up heinous signs while at a picket (possibly that of a fallen soldier). I was maybe 15 at the time, brainwashed and indoctrinated into one of the most hated cults in America if not the world. Yes, I am extremely ashamed, remorseful, apologetic and embarrassed for my actions as a brainwashed teen.

“We all have a past, different chapters of our life and this one was mine. I have lost my entire family to this cult – but thankfully I have gained a true life outside of it.” She then continues on saying how her life has shifted and how she feels better now campaigning against the hatred promoted by her former church.

She added: “In the last 12 years since I have escaped I’ve gone on to write a New York Times bestselling memoir that’s helped many understand why the cult does what it does and how children are brainwashed into the ideology. I have gone on countless national TV shows denouncing their ideology and expressing remorse.”

She is still a Christian she confirms, stating: “However, in my opinion religion of any kind is a personal choice, full of personal values, definitions and views that should stay just that, personal.

“I don’t think anyone should judge or persecute another human being or any group of individuals based off of those personal, chosen, beliefs. I am against any and all forms of violence, discrimination, bullying or bigotry directed at someone else for any reason.”