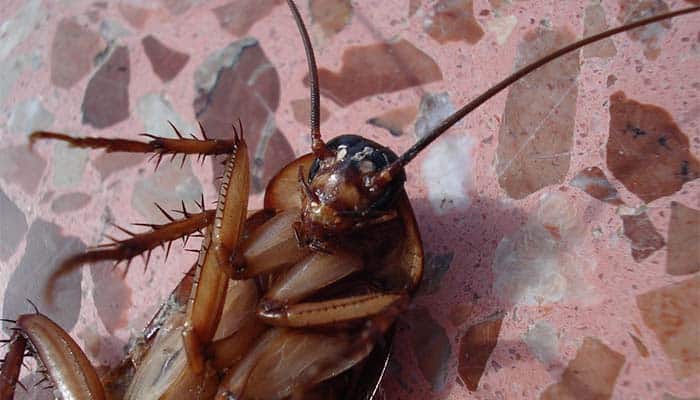 Remember that woman who jumped from a moving car to escape a spider?

Well, a Detroit man has just topped that overreation with a story of his own.

The unnamed 50-year-old man’s attempt to kill a cockroach in his Michigan apartment resulted in a trip to hospital after he accidentally shot himself.

Supposedly, the man lobbed his sneaker at the bug on Tuesday morning, only for the revolver he’d secreted away inside to go off.

The bullet flew in his direction, hitting the man in the foot.

Detroit police say the man is in stable condition following the unfortunate accident, but did not report whether or not the cockroach was harmed in the process.

They also didn’t confirm whether or not the man was telling the whole story about how his injury occurred.

Fancy Eating Insects? There Is Now A Vending Machine That Sells Edible Bugs… In Japan

Milk Made Of Insect Is Out Now And Can Save The Earth, Will You Drink It?

The Michelle Obama Podcast was released on the 29th of July and can be streamed on Spotify, both for free and premium users. The world is currently hyped that the Former First Lady of the United States has released the first episode of her latest podcast. What made listeners even more excited was when she… END_OF_DOCUMENT_TOKEN_TO_BE_REPLACED

Research in Britain has deduced that there are a total of six “general” classifications of COVID-19 symptoms. The research, originally published in June of 2020, has revealed that the symptoms of COVID-19 can be generalized into six different categories. This is based on the data collected from a symptom tracking app. It has been widely proven… END_OF_DOCUMENT_TOKEN_TO_BE_REPLACED