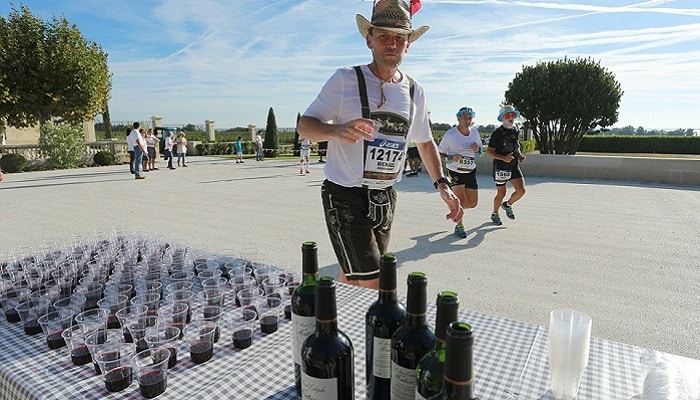 Staying fit and healthy is easier said than done. Because no matter who you are, exercise is best done not today but tomorrow… or next week, or next year even. Still, it may just be a matter of finding more incentives to do it… other than being healthy, of course– that’s not enough, okay?! So, one French marathon made it so you can eat and drink stuff along the way.

Before you say that food and alcohol will undo all the hard work you put into the marathon, apparently, it won’t, says science. The cheese and ice cream might, though. Despite that, this French marathon called Marathon du Medoc is giving its participants free rein on how much food and alcohol they can consume along the track. Yes, as much as you want.

Of course, you can’t just eat cheese and drink wine while actually running… unless you’re being chased by a cat named Tom or are a professional alcoholic. The good stuff is all located at select stations or stops on the French marathon track which incentivises pushing yourself just to get to the next type of cheese or wine. Here’s a photo of the race:

However, if wine or cheese is not your thing, there are other selections as well such as grapes, oysters, and ice cream. Of course, given the audience the said French marathon attracts, everyone is given more than 6 hours to finish the “race” which is 26.2 miles from start to finish. There is also an extra competition within the marathon where the best-dressed runner wins a prize.