Yesterday we reported on LinkedIn and its stellar earnings report for Q4 2012. Today investors celebrated the company’s better than expected earnings with stock price increases of 19.16 percent. LinkedIn shares increased to $147.86.

Revenue at LinkedIn is up 81 percent year-over-year to $304 million.

Compared to the previous quarter LinkedIn net income was up from $2.3 million to $11.5 million.

LinkedIn also impressed with new that it has surpassed the 200 million members milestone with many new members joining internationally.

Since debuting on the NYSE in May 2011 LinkedIn shares have skyrocked from their starting price of $45 per share.

LinkedIn expects to increase its earnings further in 2013 thanks to a redesigned look, new features and improving advertising options. 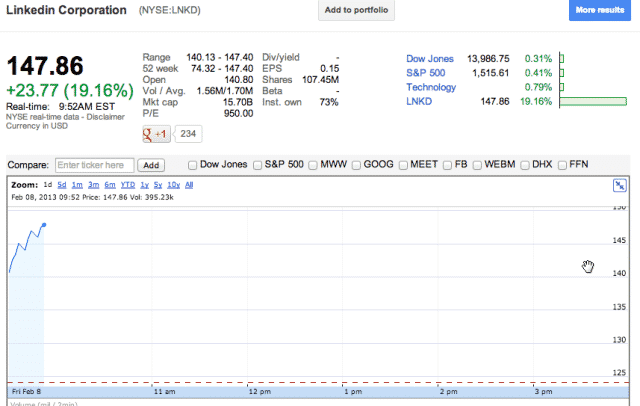