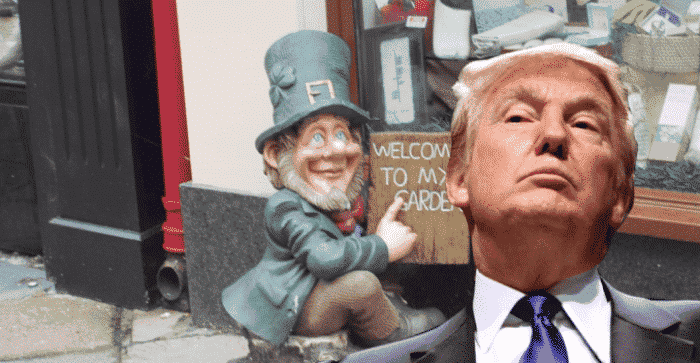 As St. Patrick’s Day festivities continue for the remainder of March, it has become quite obvious that our President is somehow related to leprechauns. It may be deep within his ancestry, but there’s no doubt that it’s there. Donald Trump not only shares several physical characteristics with these little green fairies, but he displays many personality traits that only a leprechaun could have. From his orange skin to his trickster ways, here’s all the proof you need that Trump is a leprechaun.

The Trump Family Hails From Ireland

Donald Trump has talked about his family’s roots in Ireland time and time again. It’s how he tries to prove to the world that he’s not racist towards foreigners because, as we all know, white European immigrants are treated the same as Hispanic immigrants in this country. While leprechauns can be found all over the world, they hailed from Ireland, as did the Trumps. Likely, way back when, one of the women in Trump’s line of DNA had a bit of fun with a funny little leprechaun, resulting in the birth of a child. The leprechaun gene may have remained dormant for centuries until it appeared in the one and only Donald Trump.

Trump Is A Trickster

Everyone knows that you can’t trust a leprechaun. They’re known tricksters who are always fooling people into doing things for them, often with false promises. Leprechauns are smooth talkers and can get themselves out of practically any situation. Sound familiar? Trump likely gets his ability to talk people into a confused stupor until they’re subconsciously agreeing with him from his leprechaun ancestry. We’re just fortunate that Trump only has a smidge of the green fairy in his DNA, otherwise we might have all fallen under his spell and be running around in MAGA hats.

From Trump University to his tax loopholes, Trump is always looking for his latest money scheme. His entire presidency is probably one big business plan designed to improve his brand. Trump will be selling his MAGA gear for the rest of his life, likely from prison. It’s only a matter of time before he adds MAGA orange jumpsuits and MAGA shivs to his collection.

He’ll deny it until his face turns blue, but the fact is that Trump has tiny hands. Having features that are to the body is common among leprechauns and is likely what caused the president’s mushroom pecker that Stormy Daniels loves to share TMI on. Trump is just lucky didn’t end up with leprechaun ears. That would have been a serious tragedy.

Trump’s Skin Resembles That Of An Oompa Loompa

Cousin to the leprechaun, Oompa Loompas share a significant amount of genetic makeup with the green fairies. While most leprechauns don’t end up having the orange pigment in their skin, it’s considered a common recessive gene. Since Trump is so adamant about the fact that he doesn’t spray tan, it’s possible that the orange pigment in his skin is caused by a dormant recessive gene passed on to both of his parents. So, in addition to having leprechaun blood, Trump must also share DNA with Oompa Loompas.

Better than sharing DNA with a gremlin or a Clinton!

5 Reasons Why Alexandria Ocasio-Cortez Has So Many Haters

The Blood Test, The Swab Test, and The Saliva Test      Essentially, there are three general types of COVID-19 testing produced so far. One is the rapid test, the second is the saliva test and the other is the swab test. The rapid test (also known as the anti-body test) uses blood samples. The swab test… END_OF_DOCUMENT_TOKEN_TO_BE_REPLACED

The COVID-19 pandemic is one of the biggest modern pandemics known in history. Currently, there are more than five million confirmed cases in the world, with a total of 333,000 deaths. A total of 1.6 million of these confirmed cases are in the US alone. The world is currently in a race of finding a… END_OF_DOCUMENT_TOKEN_TO_BE_REPLACED

Despite concrete data and research, people’s opinions will always be diverse when it comes to a variety of topics including religion, politics, gender, and more. Denial is a common reaction to many important discussions and serious world events. The COVID-19 pandemic does not differ from any issues and is subject to opinions from critiques all… END_OF_DOCUMENT_TOKEN_TO_BE_REPLACED

Back in January, when the Wuhan, China coronavirus broke out, it didn’t make it to the front page of newspapers, in print or virtual form. Today, January feels like a lifetime away. Like it or not, people around the world have adapted to the new normal – staying at home, frequent hand washing, and social… END_OF_DOCUMENT_TOKEN_TO_BE_REPLACED

Since the beginning of the year 2020, the whole world has been stupefied by the rapid spread of a deadly coronavirus known as COVID-19. World superpowers in the West were unable to prevent the virus from reaching their borders. Because of this fact, the novel coronavirus COVID-19 became a world-wide pandemic no less than three… END_OF_DOCUMENT_TOKEN_TO_BE_REPLACED

For months since the start of 2020, the attention of the world has focused on immediate response efforts to contain and combat the novel coronavirus, also known as COVID-19. The deadly virus has pushed millions of people into isolation.  This kept people in their homes for weeks and months away from their work, their friends,… END_OF_DOCUMENT_TOKEN_TO_BE_REPLACED