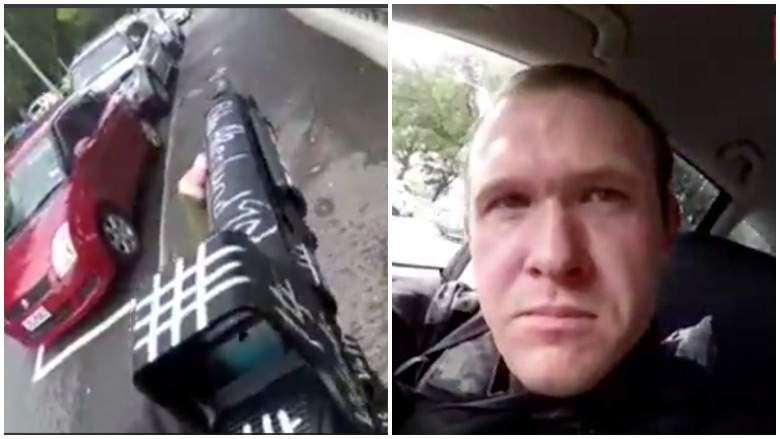 A few hours ago in Christchurch, New Zealand, one of the worst recorded hate crimes in human history took place. A lone gunman, named Brenton Tarrant, assaulted Hagley Park mosque. Armed to the teeth with military-grade rifles and shotguns, he killed 49 unarmed Muslim worshippers. Tarrant also the shooting on Facebook as he did it.

The graphic video has now since been deleted and is too violent to be uploaded. The killer’s shows Tarrant driving in his car to the said mosque, taking two guns with him after arriving, saying “let’s get this party started,” then firing more than 100 rounds to Muslim worshippers inside the building, killing 49. He also frequently made sure they are dead by shooting their bodies on the ground.

It also seems Tarrant has no prejudices killing women or minors as long as they are Muslim, as the last person he shot was a young female, and he can even be seen running over her body with his getaway car. He also referred to the massacre as a “firefight” despite no one shooting back at him.

No one in their right mind would kill unarmed and innocent civilians on their own volition. Still, Tarrant describes himself as a “regular white man, from a regular family.” He was confirmed to be a gym trainer by the manager of the gym he works at.

“He was a very dedicated personal trainer. He worked in our program that offered free training to kids in the community, and he was very passionate about that,” said Tracey Gray, the gym manager Tarrant worked with. Gray also added, “I honestly can’t believe that somebody I have probably had daily dealings with and had shared conversations and interacted with would be capable of something to this extreme.”

The Blood Test, The Swab Test, and The Saliva Test      Essentially, there are three general types of COVID-19 testing produced so far. One is the rapid test, the second is the saliva test and the other is the swab test. The rapid test (also known as the anti-body test) uses blood samples. The swab test… END_OF_DOCUMENT_TOKEN_TO_BE_REPLACED

The COVID-19 pandemic is one of the biggest modern pandemics known in history. Currently, there are more than five million confirmed cases in the world, with a total of 333,000 deaths. A total of 1.6 million of these confirmed cases are in the US alone. The world is currently in a race of finding a… END_OF_DOCUMENT_TOKEN_TO_BE_REPLACED

Despite concrete data and research, people’s opinions will always be diverse when it comes to a variety of topics including religion, politics, gender, and more. Denial is a common reaction to many important discussions and serious world events. The COVID-19 pandemic does not differ from any issues and is subject to opinions from critiques all… END_OF_DOCUMENT_TOKEN_TO_BE_REPLACED

Back in January, when the Wuhan, China coronavirus broke out, it didn’t make it to the front page of newspapers, in print or virtual form. Today, January feels like a lifetime away. Like it or not, people around the world have adapted to the new normal – staying at home, frequent hand washing, and social… END_OF_DOCUMENT_TOKEN_TO_BE_REPLACED

Since the beginning of the year 2020, the whole world has been stupefied by the rapid spread of a deadly coronavirus known as COVID-19. World superpowers in the West were unable to prevent the virus from reaching their borders. Because of this fact, the novel coronavirus COVID-19 became a world-wide pandemic no less than three… END_OF_DOCUMENT_TOKEN_TO_BE_REPLACED

For months since the start of 2020, the attention of the world has focused on immediate response efforts to contain and combat the novel coronavirus, also known as COVID-19. The deadly virus has pushed millions of people into isolation.  This kept people in their homes for weeks and months away from their work, their friends,… END_OF_DOCUMENT_TOKEN_TO_BE_REPLACED