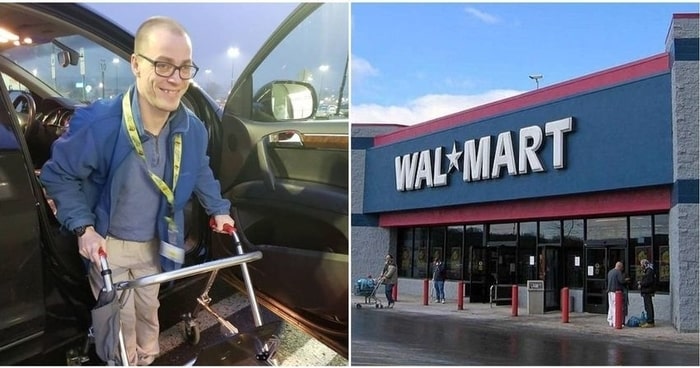 After enduring a nationwide backfire against their new policies, Walmart declared it will make “every effort” to furnish new jobs to their mentally-challenged greeters.

Back in April, Walmart officially got rid of their “greeter” position. The chain announced this year stores nationwide would be substituting nearly 1,000 front door greeters with “hosts”, though the alteration of title consisted of new physical requirements that most greeters could not pass.

30 year-old Adam Catlin from the Selinsgrove, Pennsylvania Walmart Supercenter, who has limited dexterity in his hands and is legally blind, was one of numerous greeters with disabilities cautioned that if he could not transition into the new position (at his store), he would be terminated.

Holly, Catlin’s mother, posted online that he was being “thrown to the curb from his job that he truly loves and does [wholeheartedly].” However this month, after facing nationwide scrutiny against the new rules, Walmart quickly changed up their latest tune.

Craig Johnson, retail consultant called the retailer’s original stance “a major-league botch” that justifiably stirred up ire. In a letter to store managers, Greg Foran, the CEO of Walmart’s U.S. stores, stated that a number of greeters had already been offered new positions at their stores.

Foran pens Walmart is “taking specific steps to support” their disabled greeters. One of those steps is prolonging the 60-day period Walmart employees are typically given to secure new jobs within the company.

Catlin and a few other disabled greeters with cerebral palsy have took on new roles in the self-checkout department. Walmart’s new “hosts” are slated to greet customers, but too prevent shoplifting, assist with returns, and do other chores to help maintain store cleanness.

The Blood Test, The Swab Test, and The Saliva Test      Essentially, there are three general types of COVID-19 testing produced so far. One is the rapid test, the second is the saliva test and the other is the swab test. The rapid test (also known as the anti-body test) uses blood samples. The swab test… END_OF_DOCUMENT_TOKEN_TO_BE_REPLACED

The COVID-19 pandemic is one of the biggest modern pandemics known in history. Currently, there are more than five million confirmed cases in the world, with a total of 333,000 deaths. A total of 1.6 million of these confirmed cases are in the US alone. The world is currently in a race of finding a… END_OF_DOCUMENT_TOKEN_TO_BE_REPLACED

Despite concrete data and research, people’s opinions will always be diverse when it comes to a variety of topics including religion, politics, gender, and more. Denial is a common reaction to many important discussions and serious world events. The COVID-19 pandemic does not differ from any issues and is subject to opinions from critiques all… END_OF_DOCUMENT_TOKEN_TO_BE_REPLACED

Back in January, when the Wuhan, China coronavirus broke out, it didn’t make it to the front page of newspapers, in print or virtual form. Today, January feels like a lifetime away. Like it or not, people around the world have adapted to the new normal – staying at home, frequent hand washing, and social… END_OF_DOCUMENT_TOKEN_TO_BE_REPLACED

Since the beginning of the year 2020, the whole world has been stupefied by the rapid spread of a deadly coronavirus known as COVID-19. World superpowers in the West were unable to prevent the virus from reaching their borders. Because of this fact, the novel coronavirus COVID-19 became a world-wide pandemic no less than three… END_OF_DOCUMENT_TOKEN_TO_BE_REPLACED

For months since the start of 2020, the attention of the world has focused on immediate response efforts to contain and combat the novel coronavirus, also known as COVID-19. The deadly virus has pushed millions of people into isolation.  This kept people in their homes for weeks and months away from their work, their friends,… END_OF_DOCUMENT_TOKEN_TO_BE_REPLACED