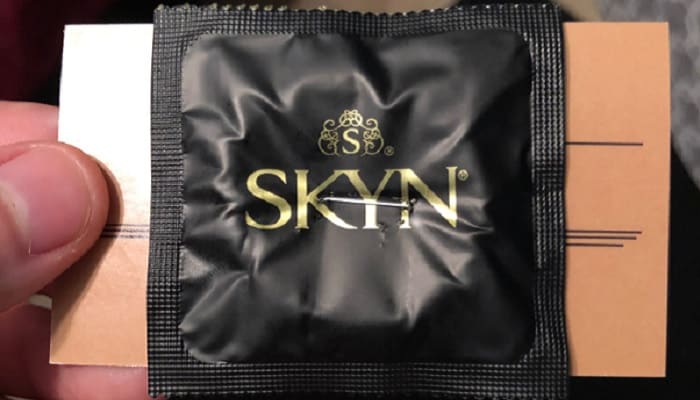 Barbers are just as important to men as salons are to women. After all, its the hair that makes a man, just go ask Samson, he’s been there. Suffice to say, barbers are quite popular, more so if they have mad skills. One barber from the US did and was confident about them, so he did a condom promotion for his service. However, there was something hilariously wrong with it.

Jake Gamez is what one can consider an artiste in matters concerning hair, men’s hair especially. Gamez works at the Fadeaway Barbershop in Corpus Christi, Texas. So confident was Gamez at his skills, that he prepared a special condom promotion where he will give customers their own condoms after they had their haircut. He even posted the gesture on Twitter:

Gotta include one of these with every card! You’re going to need it after I cut your hair 💈🥇Trust me 🙌🏼 pic.twitter.com/V8XEusCgoe

Very suggestive, we all know what condoms are for and all the good things they represent (or bad things if you’re a Catholic priest). However, brilliant as Gamez might be at haircuts, he should have left out the condom giveaways to experts, because condom repackaging is clearly not his forte. That, or maybe poking holes in the condoms were intentional…

Of course, the internet was quick to respond to Gamez’s condom promotion:

Who gone tell him… pic.twitter.com/ICypB2D14f

Some even thought that it was a brilliant business strategy, take note stockbrokers, this is how you create a demand for something:

Then he gets to cut your kids hair pic.twitter.com/r9prsnNpFx

Gamez, however, also responded to the tweets and joined in on the fun:

Little of my work!💈 Thank you all for being here. Truly an honor 🎉 pic.twitter.com/cfoNP4oEud

Yep, he’s definitely trying to corner the child market as well with that condom promotion. That’s two birds with one stone right there, your move Wall Street.

The Blood Test, The Swab Test, and The Saliva Test      Essentially, there are three general types of COVID-19 testing produced so far. One is the rapid test, the second is the saliva test and the other is the swab test. The rapid test (also known as the anti-body test) uses blood samples. The swab test… END_OF_DOCUMENT_TOKEN_TO_BE_REPLACED

The COVID-19 pandemic is one of the biggest modern pandemics known in history. Currently, there are more than five million confirmed cases in the world, with a total of 333,000 deaths. A total of 1.6 million of these confirmed cases are in the US alone. The world is currently in a race of finding a… END_OF_DOCUMENT_TOKEN_TO_BE_REPLACED

Despite concrete data and research, people’s opinions will always be diverse when it comes to a variety of topics including religion, politics, gender, and more. Denial is a common reaction to many important discussions and serious world events. The COVID-19 pandemic does not differ from any issues and is subject to opinions from critiques all… END_OF_DOCUMENT_TOKEN_TO_BE_REPLACED

Back in January, when the Wuhan, China coronavirus broke out, it didn’t make it to the front page of newspapers, in print or virtual form. Today, January feels like a lifetime away. Like it or not, people around the world have adapted to the new normal – staying at home, frequent hand washing, and social… END_OF_DOCUMENT_TOKEN_TO_BE_REPLACED

Since the beginning of the year 2020, the whole world has been stupefied by the rapid spread of a deadly coronavirus known as COVID-19. World superpowers in the West were unable to prevent the virus from reaching their borders. Because of this fact, the novel coronavirus COVID-19 became a world-wide pandemic no less than three… END_OF_DOCUMENT_TOKEN_TO_BE_REPLACED

For months since the start of 2020, the attention of the world has focused on immediate response efforts to contain and combat the novel coronavirus, also known as COVID-19. The deadly virus has pushed millions of people into isolation.  This kept people in their homes for weeks and months away from their work, their friends,… END_OF_DOCUMENT_TOKEN_TO_BE_REPLACED