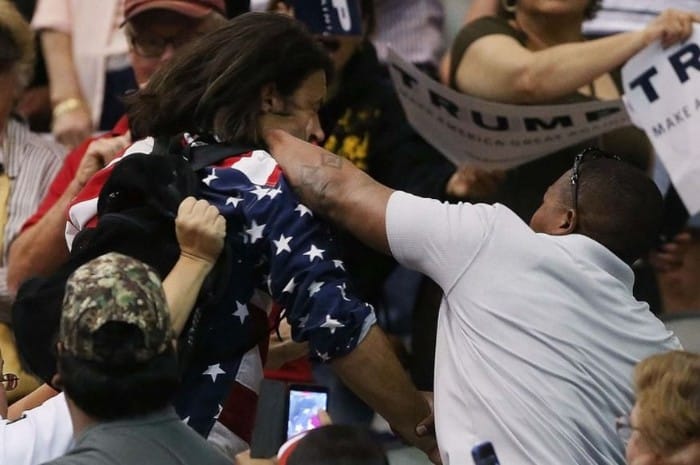 The division between liberals and conservatives in our country has proven to bring out a frightening animalistic nature in people. Both sides are equally guilty of succumbing to mob mentality and taking things too far by leading both verbal and physical altercations. It has gotten to the point that assaulting someone over their political views is the new norm and rarely a day goes by when these stories aren’t clogging up the media. These videos show the most insane fights between liberals and conservatives over Trump’s America.

Short for “anti-fascist” or “Anti-Fascist action,” ANTIFA is a left-wing extremist group that uses violence to oppose those it considers fascist. While there is no leader, structure, or headquarters for the organization, anyone can set up a local branch in their area. This particular video shows the ANTIFA group “Oregon Students Empowered” at an anti-cop rally speaking out against police targeting in a confrontation with the conservative group “Patriot Prayer.” Neither side seems to have a grasp on what they’re actually arguing about, and instead of having a mature political debate they just egg each other on.

2. Trump Supporter vs. The Media

During a Trump rally in El Paso, a right-wing extremist attacked BBC cameraman Ron Skeans, violently pushing him while shouting “F*ck the media!” Trump is notorious for his distaste of the media and often bad-mouths them during his speeches, and apparently, this guy took the president’s words a bit too seriously. The assailant was removed by security while the crowd booed. In a surprising move, the president actually asked if Skeans was okay after it all went down.

An anti-Trump mob attacked Trump supporters as they left an event in San Jose, California back in 2016. Many of the aggressors on the left carried the Mexican flag, damaged vehicles, burned MAGA hats, threw eggs and participated in all-out brawls.

This Trump supporter took on an entire group of protestors, many who look like ANTIFA members. While the man’s lady friend claims the two just wanted to talk, the protestors weren’t having it. Obviously, they didn’t recognize the fact that they were attempting to debate politics with the violent alt-left organization. While it didn’t get physical, that didn’t stop each side from trying.

5. ANTIFA At It Again

ANTIFA gives left-wing politics a bad name almost as much as alt-right conservatives give Trump supporters a bad name. The two were going at it on a beach in California, accomplishing the usual: a whole lot of nothing.

6. Liberals vs. Conservatives At Trump’s Inauguration

Women made history when they came together for Trump’s inauguration to protest the president, and Trump’s supporters couldn’t handle it. The women linked their arms together to block people from attending the ceremony, and instead of going around them, several Trump supporters attempted to go through them. Obviously, this didn’t go so well. Both sides got incredibly heated and childish behavior ensued. Bravo!

Trump is the First American President who gets impeached for the second time. Trump’s second impeachment became a trending topic on Twitter after the terrifying terrorist attack on Capitol Hill on the 6th of January. Twitter is at it again, being flooded with memes and Twitter jokes surrounding Trump’s second impeachment trial. Americans are trying to… END_OF_DOCUMENT_TOKEN_TO_BE_REPLACED

Twitter thoughts about the Capitol Riots posted by millions of Americans on the platform is a great read. Readers always get to see the two sides of a story. They get to learn what truly happened, what is the current development on the situation, and more. In this case, humor is always an easy defense. Many… END_OF_DOCUMENT_TOKEN_TO_BE_REPLACED