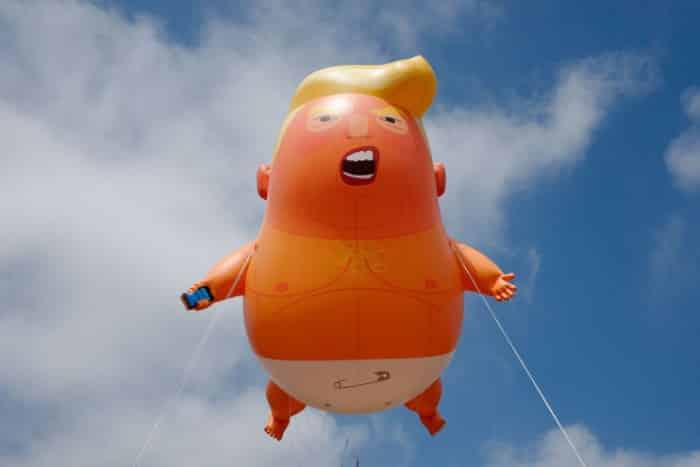 Everyone deserves a night off every now and then, even President Trump’s trusty advisors. Since Trump can’t be left alone in the White House without starting World War III, his advisors have come up with a method that allows them to go out and keeps the country safe: Babysitters. Disguised as new advisors and White House employees, this babysitting gig comes with a hefty list of responsibilities. Here’s the list of rules Trump’s babysitters are left with in an attempt to prevent disaster.

If you don’t he’ll be cranky all day and throw fits that can be impossible to manage. A well-rested Trump is a happy Trump, and your job will much easier.

Prevent Trump from walking around in his underwear by laying his clothes out for him each morning. It’s a cringeworthy sight that will be eternally burned into your memory.

Staring at Trump’s hair will trigger his insecurities and he will spend the next three hours making you touch it, pull it, and style it. This will not end until you admit just how great his hair is.

Trump has a daily appointment with his “masseuse.” This is when he gets his spray tan. You should never acknowledge this or his spray tan, as he thinks it looks natural. Failure to do this will result in hours of denial on his part and likely your termination.

Twitter keeps him busy so that White House officials can get work done with limited interruption. It also prevents Trump from causing any irreversible damage to our country, like pressing that big red button on his desk he just loves to brag about.

It doesn’t matter what they are, as long as there’s a place asking for his signature at the bottom. He won’t read it. We don’t think he actually knows how to read. There’s a file specifically created for this reason that will be emailed to you. Simply print out all thirty pages and hand them to him. The documents contain a bunch of jibberish, and his signature is meaningless, but it keeps him busy for a week or so. Shred upon his completion and repeat.

Agree With Everything Trump Says

No matter how ridiculous or how wrong he is, always agree with anything Trump says. He will never see reason. It’s just easier this way.

Whenever Trump gets to a point where you just can’t handle his immature ways even a moment longer, send him golfing. It’ll give you a break and keep the country safe at the same time.

If Anyone Asks, Melania Still Lives In The White House

She doesn’t, but Trump doesn’t want the media to know this. If anyone asks, Melania just stepped out to do one of the following: attend an anti-bullying ralley, to meet with Barron’s teachers, or do an interview. Never use the words spa, plastic surgery, or divorce.

Who’s Really To Blame For All Of This Fake News

Gift-giving isn’t just a seasonal affair between friends, families and acquaintances. The art of gift-giving is also conducted on a national scale with countries often sending each other big, weird and expensive gifts. Experts in all things gifts, Vanilla Reindeer put together some examples of these expensive and odd gifts that have been shared between… END_OF_DOCUMENT_TOKEN_TO_BE_REPLACED

There are lots of ways you can make Pres. Trump feel welcome: you can offer him coffee, or mow a penis into a field for him to view as his plane lands. The willie in question has been chopped by Born Eco ahead of the arrival of President Trump, who visited the UK Monday for… END_OF_DOCUMENT_TOKEN_TO_BE_REPLACED

The year isn’t even halfway over, yet Donald Trump has managed to make a fool of himself and our country countless times. From inviting the national college football champions, the Clemson Tigers, all the way to the White House for some McDonald’s to his to the dreaded results of Mueller’s investigation, it has been one… END_OF_DOCUMENT_TOKEN_TO_BE_REPLACED

Republicans have always said that when they gained control in Congress, they would work to overturn Roe v. Wade and here they are, cashing in on that promise one state at a time. So far, Alabama, Arkansas, Georgia, Kentucky, Missouri, and Ohio have all passed incredibly restrictive laws on abortions, making it illegal for women… END_OF_DOCUMENT_TOKEN_TO_BE_REPLACED

If you’re on Snapchat, then you’ve probably played around with (and were likely horrified by) their filter gender swap filters. While you’re probably using these filters to send hilarious pics to your friends, some guys using them to create Tinder profiles. What likely started out as a joke has quickly evolved, and these guys are… END_OF_DOCUMENT_TOKEN_TO_BE_REPLACED

“Milkshaking” is a hilarious trend in Britain where a milkshake is thrown at and ideally lands on a far-right politician or activist. The point of this nonviolence protest is to humiliate them without causing injury. Physical injury at least. There’s no doubt that milkshaking has led to a few bruised egos. Not only is this… END_OF_DOCUMENT_TOKEN_TO_BE_REPLACED