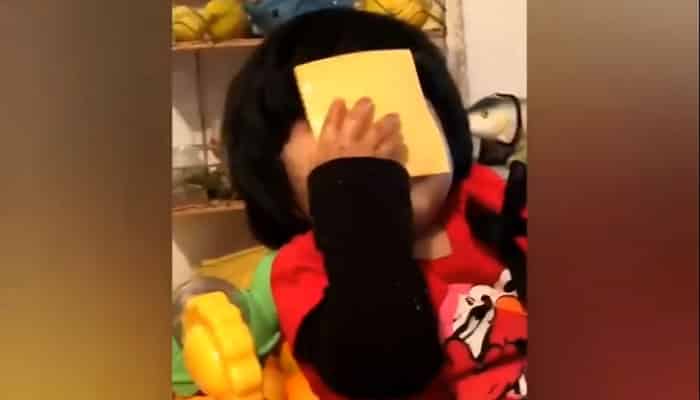 2019 is the year of challenges and it’s only just beginning. Goodness knows what new internet fad awaits us down the road. Of course, soon after the Momo Challenge scare, a new one came out the woodwork called the “Cheese Challenge” where parents… uh, throw cheese at the face of their babies and upload a video of it on social media.

No, that’s not the reason aliens never visit us, but it’s pretty close. Apparently, a lot of parents and anyone who has a baby in the house love to throw cheese on the babies just to post it online. While the challenge is quite safe since the parents only throw slices of cheese instead of blocks at babies, a Children’s Rights executive director has chimed in on the matter.

Apparently the #cheesechallenge is a thing #baby #oregon

“This phenomenon is not child abuse and is generally not meant to harm the child. But parents should, first and foremost, treat their children with care. Throwing cheese at helpless babies can, in some cases, shock them and lead to unnecessary discomfort. Is that really worth a few social media likes?” says Sandy Santana, the director in question.

Celebrities, on the other hand, are quite polarized regarding the said challenge, with people like Chrissy Teigen mostly left unimpressed, “I love a prank as much as anybody, but I cannot get myself to throw cheese at my adorable, unsuspecting baby who has all the hope and trust in the world in me.”

After Bird Box Challenge Craze, Someone Finally Wore A Blindfold… While Driving

Presidential pardons are one and many in the history of the US. There are many times when US Presidents granted reprieves for their citizen’s misdeeds. The US President may grant a pardon for any individual, including himself, for any crimes done against the country and its citizens. This issue of Presidential pardons has been trending… END_OF_DOCUMENT_TOKEN_TO_BE_REPLACED

President Biden has tapped Rachel Levine to be his assistant secretary of health, making her the first publicly transgender federal official. In 2017, Democratic Gov. Tom Wolf appointed Levine to her current post, making her one of the few transgender persons serving in appointed or elected positions countrywide. Biden said in a statement: “Dr. Rachel… END_OF_DOCUMENT_TOKEN_TO_BE_REPLACED

The minimum wage hike has always been an issue in the US for the past decades. With only a few hours before Biden gets inaugurated as the President of the United States, people are excited for all his promises to take place. One of these is his plans to raise the minimum wage of workers… END_OF_DOCUMENT_TOKEN_TO_BE_REPLACED