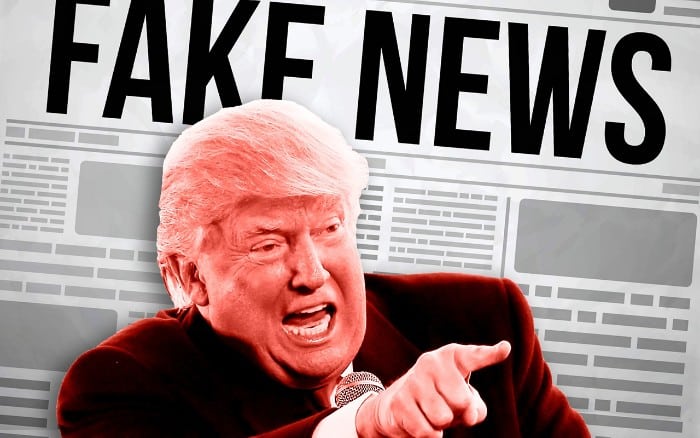 Fake news spreads faster than genital warts at Coachella and has significantly contributed to the division in our country. So, who’s to blame for this? Is it President Trump for his inability to tell the truth? Is it social media for providing a platform for fake news to spread? Or is it us, gullible Americans who are too lazy to fact check a story before sharing it? The truth is, it’s all of that and more. Here’s a look at who’s really to blame for all of this fake news.

The creator of Facebook became the target of blame for fake news after evidence surfaced that fake accounts and groups on the social media platform heavily influenced the 2016 presidential election. While Mark Zuckerberg didn’t personally create these accounts or publish any misinformation himself, he has been blamed along with Facebook for not having the proper measures in place to recognize fake accounts. It wasn’t until after Trump won the election that it was discovered that Russian groups spent $100k on pro-Trump Facebook ads leading Facebook to create more restrictions and transparency on any political ads. Facebook may be to blame for helping people spread fake news, but who’s behind creating it?

Americans expect the president to keep people in the dark when it comes to certain political issues, but Trump takes this to a whole new level. He lies about the lies he’s told. He lies about things no one has asked him about or even cares to know. He lies to his family, to his supporters, to the press, and even to himself. Trump may have created the expression “fake news,” but he’s the biggest producer of misinformation from the White House. Is he really to blame though if people are willing to believe every word out of his mouth?

Worse than creating fake news stories is those who spread them, and Fox News is certainly guilty of doing that. Not only do they spread the lies told by Trump and his officials, but they package them in a way so that viewers think it’s the truth. Right-wing or not, they’re not doing our country any favors.

A recent study showed that people over 65, known as the baby boomers, are seven times most likely to share fake news on Facebook. While it’s unknown why older people are more susceptible to nonsense they see on the social media platform, it likely has to do with the fact that they didn’t grow up using this kind of technology. News back then was simply factual. They don’t realize that the internet opens doors for satire, uneducated opinions, and deliberate fake news.

Trolls just love to create fake news stories and share them on social media for the sheer entertainment of seeing how many people fall for it. Also known as the scum of the internet, they can be dangerous if they have an agenda in mind. Exhibit A: The Russians helping Trump get elected by spreading fake news on Facebook.

That’s just my OPINION though, as this is an OPINION if you couldn’t already tell. (Do I need to say it LOUDER for the conservatives in the back?)

How did he die? An African American man, George Floyd, 46, was killed by Minneapolis Police officers. Floyd was being investigated for forgery. George Floyd’s death was caused by a police officer holding him down on the ground with a knee on his neck. He was not shot to death but instead strangulated. Now, his family… END_OF_DOCUMENT_TOKEN_TO_BE_REPLACED

The Blood Test, The Swab Test, and The Saliva Test      Essentially, there are three general types of COVID-19 testing produced so far. One is the rapid test, the second is the saliva test and the other is the swab test. The rapid test (also known as the anti-body test) uses blood samples. The swab test… END_OF_DOCUMENT_TOKEN_TO_BE_REPLACED

The COVID-19 pandemic is one of the biggest modern pandemics known in history. Currently, there are more than five million confirmed cases in the world, with a total of 333,000 deaths. A total of 1.6 million of these confirmed cases are in the US alone. The world is currently in a race of finding a… END_OF_DOCUMENT_TOKEN_TO_BE_REPLACED

Despite concrete data and research, people’s opinions will always be diverse when it comes to a variety of topics including religion, politics, gender, and more. Denial is a common reaction to many important discussions and serious world events. The COVID-19 pandemic does not differ from any issues and is subject to opinions from critiques all… END_OF_DOCUMENT_TOKEN_TO_BE_REPLACED

Back in January, when the Wuhan, China coronavirus broke out, it didn’t make it to the front page of newspapers, in print or virtual form. Today, January feels like a lifetime away. Like it or not, people around the world have adapted to the new normal – staying at home, frequent hand washing, and social… END_OF_DOCUMENT_TOKEN_TO_BE_REPLACED

Since the beginning of the year 2020, the whole world has been stupefied by the rapid spread of a deadly coronavirus known as COVID-19. World superpowers in the West were unable to prevent the virus from reaching their borders. Because of this fact, the novel coronavirus COVID-19 became a world-wide pandemic no less than three… END_OF_DOCUMENT_TOKEN_TO_BE_REPLACED