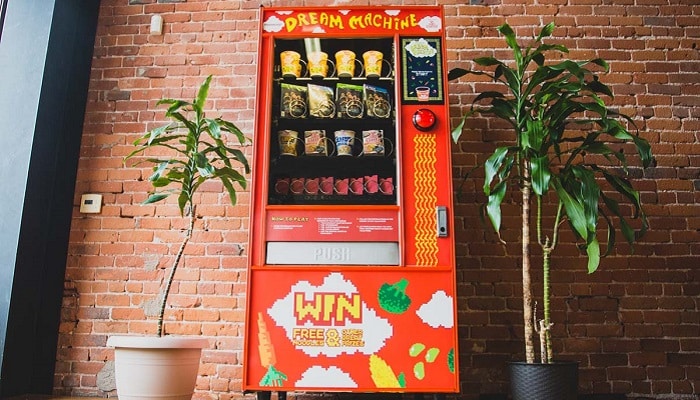 When in doubt about the future of humanity, look to Black Mirror for answers, that show predicts everything. In fact, the Netflix show might have predicted another technological causality in one episode where social media is all that matters; there is now a vending machine in the US that lets you buy cup noodles with “likes.” So yeah, it’s starting now, ready or not.

If you thought using social media “likes” to get freebies is the apogee of modern entitlement, then one mall in Los Angeles, California probably doesn’t. The said mall, Del Amo Fashion Center, is showcasing a special type of vending machine which allows customers to purchase cup noodles with “likes” instead of money.

“Post a selfie to drop a prize from the shelfie,” says the sign on the vending machine in question. The users will have to press a button for the machine to generate a random hashtag which will have to be used by the customer in an Instagram post along with their selfie while tagging @foodbeast and @originalcupnoodles in their post.

Once the machine recognizes the post, it will spit out instructions on how to get the cup noodles or other “prizes” inside such as video games, gift vouchers, and merchandise:

“We’re hoping this machine allows for the democratization of the Instagram influencer experience,” expressed Rudy Chaney, co-founder of Foodbeast, the company responsible for the vending machine. He also claimed their idea began as a joke, but they now have plans to place another one on Las Vegas, Nevada soon.

Together with the fireworks for the Independence Day weekend, the latest explosive Hollywood news involves no one else but the controversial Kanye West. The famous celebrity has revealed his plans for a presidential run. Originally planned for 2024, he has stated that he is actually going to run for the 2020 Presidential elections in November. The… END_OF_DOCUMENT_TOKEN_TO_BE_REPLACED

Recent trends have reported that K-pop fans in the US are getting mixed in with current issues in politics. K-pop fan communities are using online platforms to rally up and protest against racism in the United States. In support of the #BlackLivesMatter movement, the online K-pop community has come together in protest. Never has it… END_OF_DOCUMENT_TOKEN_TO_BE_REPLACED