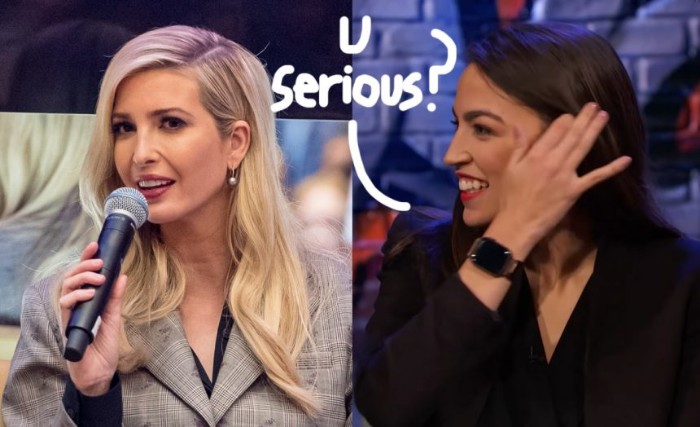 It seems that a clear disconnect from reality runs in the Trump family as Ivanka has become the latest member to prove just how little she understands the average middle class American. In an interview with Fox News, Ivanka was asked for her thoughts on Alexandria Ocasio-Cortez’s Green New Deal to which she responded by saying:

I don’t think most Americans in their heart want to be given something. I’ve spent a lot of time traveling around this country over the last four years. People want to work for what they get, so I think this idea of a guaranteed minimum is not something most people want. They want the ability to be able to secure a job. They want the ability to live in a country where there’s potential for upward mobility.

If you’re unfamiliar with the Green New Deal, it covers a range of topics including a section that aims to guarantee “…a job with a family-sustaining wage, adequate family and disability leave, paid vacations, and retirement security to all people of the United States.” While this statement covers the basic needs Americans should be receiving in exchange for their labor, Ivanka, who has likely never had to live off of minimum wage in her life, thinks she knows better. The interview sparked some hilarious responses on Twitter, including some by Ocasio-Cortez herself.

When Ocasio-Cortez got wind of Trump’s comments on Fox News, she turned to Twitter to respond. Not only does AOC point out that she actually has experience working for minimum wage but she backs up her comments with proof.

As a person who actually worked for tips & hourly wages in my life, instead of having to learn about it 2nd-hand, I can tell you that most people want to be paid enough to live.

A living wage isn’t a gift, it’s a right. Workers are often paid far less than the value they create.

In fact, wages are so low today compared to actual worker productivity that they are no longer the reflections of worker value as they used to be. Productivity has grown 6.2x more than pay:

In response to AOC’s tweets, Trump took to Twitter as well responding by saying:

I did not. I support a minimum wage. I do not, however, believe in a minimum guarantee for people ‘unwilling to work’ which was the question asked of me. I’ve spent much of the last 2 years focused on inclusive economic growth via workforce development and skills training as well as pro-working family policies such as the doubled Child Tax Credit & CCDBG.

Actually, Ivanka, that’s not what the interviewer asked you. Steve Hilton asked:

You’ve got people who will see that offer from the Democrats, from the progressive Democrats. Alexandria Ocasio-Cortez, here’s the Green New Deal, here’s a guarantee of a job. And think ‘yeah, that’s what I want. That simple.’ What do you say to those people?

Hilton never says anything about those “unwilling to work” which was a phrase used in an incomplete and accidentally published fact-sheet on the Green New Deal. The phrase isn’t actually in the deal nor is it what AOC had in mind. Also, the Child Tax Credit and the Child Care and Development Fund Reauthorization (CCDBG) are completely irrelevant and might even be obsolete if Americans were paid a living wage.

Confusion Over What Minimum Wage Is

There are far too many misconceptions when it comes to why a minimum wage was formed. The Fair Labor Standards Act of 1938 was developed in order to ban oppressive child labor, ensure workers received a fair living wage, and to set the maximum hours a person can be required to work per week. Formed by Franklin D. Roosevelt starting in 1933, he explained that “no business which depends for existence on paying less than living wages to its workers has any right to continue in this country.” At the time that wage was $0.25 per week and has been adjusted several times since then. However, many people, especially those who live in expensive cities, aren’t able to live off of these wages any longer as they haven’t been modified to meet inflation rates.

Not only was the minimum wage designed to give Americans a salary they can live off of, but it was created so that businesses wouldn’t be able to take advantage of their employees without paying overtime or facing penalties. FDR wanted our country to be able to give “all our able-bodied working men and women a fair day’s pay for a fair day’s work. A self-supporting and self-respecting democracy can plead no justification for the existence of child labor, no economic reason for chiseling worker’s wages or stretching workers’ hours.”

Debate Over What A Living Wage Means

Americans might be able to live off of a minimum wage these days if they’re single, have no kids, and live in the middle of nowhere but that’s not a reality for most of us. The average cost of homes in the United States is $225,300 according to Zillow, yet the salary earned on minimum wage is just over $15k before taxes. With the average one-bedroom apartment costing $1,234 per month before utilities, our country’s minimum wage doesn’t even cover the most basic living spaces.

If Ivanka Led Her Life By Her Own Views

If Ivanka led her life by her own views, it would be impossible for her to earn her current salary. Since she never had to work her way up the career ladder, she might see things differently if she got a glimpse at what it’s like to start from the bottom. Life isn’t so easy when your last name doesn’t open doors for you and you don’t have your family’s money to fall back on.

It would seem that those who are against raising the minimum wage to a living salary think those who flip burgers and tend bars don’t deserve a salary that affords them food and housing. Blue collar workers are often looked down on in our society yet they work harder than nearly anyone else. They work ridiculous hours, sacrifice their bodies, don’t take off holidays, and are often given few or no benefits. Don’t they deserve to work in the industry they choose and still be able to afford a home?

Not everyone is interested in working in “high powered” office jobs. Sitting behind a desk isn’t an ideal situation for everyone, and they shouldn’t be punished for it. Without blue collar workers, we’d have no one making our lunches at McDonald’s, pouring our drinks at our favorite bars, or driving us home in the wee hours of the night when we’ve had too much to drink. We rely on these employees every day, and they deserve to be paid accordingly.

Most Cringeworthy Statements Made By Alt-Right Politicians