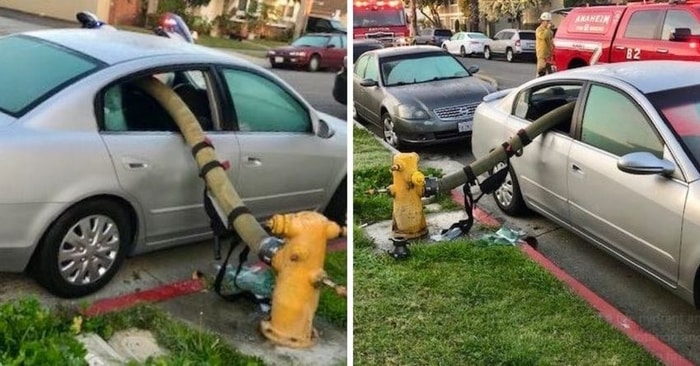 A fire hose weighs over 100 lbs, and needs an unbent line from nozzle to hydrant – meaning if you park in front of one, your windows will be smashed.

Parking in specific, tends to be one of those instances that just brings out people’s inner self-absorbance. “This is illegal, but whatev..” is how it seems many drivers on planet Earth feel – e.g. by taking up multiple spots, parking in front of driveways, blocking traffic, parking in front of fire hydrants, name it.

The Anaheim Fire & Rescue Department, however, may have just deterred many people from conducting at least one of those illegal acts after posting a jaw-dropping image on social media.

“Ever wonder what happens when a car is parked in front of a fire hydrant and a fire breaks out?” the department asked on Twitter, exhibiting a silver sedan with both back windows bashed in and a fire hose yanked through the car. “Is a closer parking spot worth the broken windows and the citation and towing fees?”

As you can imagine, the post was an instant hit; with many individuals commenting the unlawful parker got exactly what he deserved. Some recommended that the firefighters could have hoisted the hose under the car, or over it, and that the broken windows were uncalled for. The department retorted.

“The weight would have caused even more body damage and the angle down to the hydrant would not allow appropriate water pressure,” they explained. “We do not intentionally damage people’s property unless absolutely necessary.

“We posted this incident to illustrate and educate, not to humiliate anyone.” And just in case any of you aren’t schooled on the matter, it’s against the law to park within 15 feet of a fire hydrant.

Gift-giving isn’t just a seasonal affair between friends, families and acquaintances. The art of gift-giving is also conducted on a national scale with countries often sending each other big, weird and expensive gifts. Experts in all things gifts, Vanilla Reindeer put together some examples of these expensive and odd gifts that have been shared between… END_OF_DOCUMENT_TOKEN_TO_BE_REPLACED

There are lots of ways you can make Pres. Trump feel welcome: you can offer him coffee, or mow a penis into a field for him to view as his plane lands. The willie in question has been chopped by Born Eco ahead of the arrival of President Trump, who visited the UK Monday for… END_OF_DOCUMENT_TOKEN_TO_BE_REPLACED

The year isn’t even halfway over, yet Donald Trump has managed to make a fool of himself and our country countless times. From inviting the national college football champions, the Clemson Tigers, all the way to the White House for some McDonald’s to his to the dreaded results of Mueller’s investigation, it has been one… END_OF_DOCUMENT_TOKEN_TO_BE_REPLACED

Republicans have always said that when they gained control in Congress, they would work to overturn Roe v. Wade and here they are, cashing in on that promise one state at a time. So far, Alabama, Arkansas, Georgia, Kentucky, Missouri, and Ohio have all passed incredibly restrictive laws on abortions, making it illegal for women… END_OF_DOCUMENT_TOKEN_TO_BE_REPLACED

If you’re on Snapchat, then you’ve probably played around with (and were likely horrified by) their filter gender swap filters. While you’re probably using these filters to send hilarious pics to your friends, some guys using them to create Tinder profiles. What likely started out as a joke has quickly evolved, and these guys are… END_OF_DOCUMENT_TOKEN_TO_BE_REPLACED

“Milkshaking” is a hilarious trend in Britain where a milkshake is thrown at and ideally lands on a far-right politician or activist. The point of this nonviolence protest is to humiliate them without causing injury. Physical injury at least. There’s no doubt that milkshaking has led to a few bruised egos. Not only is this… END_OF_DOCUMENT_TOKEN_TO_BE_REPLACED