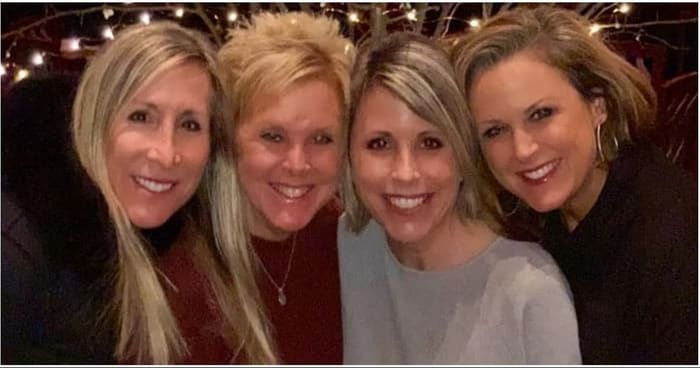 A quartet of ladies from two contrary sides of the country are spilling an astounding DNA test coincidence that ushered them together as a family.

Shannon Nicholl, 49, and Rachelle Dyer, 53, were the initial ones to stumble upon the unbelievable connection, after Rachelle relocated to Virginia Beach, Virginia from her birthplace of Seattle, Washington. There, Shannon and Rachelle became pals with the same people, who commented often that the two evidently unrelated women looked just like one another.

The two deemed it just a comical coincidence. Though when Rachelle submitted an Ancestry.com DNA test, it disclosed a shocking link between her and her dead ringer, Shannon. By uniting with a cousin on Ancestry.com, Rachelle and her twin sis Kristelle discovered that Shannon and her elder sis Lisa Holley Vann, 51, are their ½ sisters!

While Rachelle and Kristelle had knowledge they were put up for adoption as infants, the news that they possessed sisters on the other side of the country was startling. But – the other sisters were equally stunned.

“Lisa and I had no idea at all that our mother had even given birth to twins in the past,” Shannon spoke on television. “They knew that they were adopted all these years — so for us, it was pretty mind-blowing.”

The four females met face-to-face finally for the first time this year, commemorating the end of an enigma that none of them were even aware of until most recently. The four sisters are already laughing in unison and finishing each other’s sentences, however they have much more catching up to do as they recoup lost time.

Alas, the mother of the four sisters, Janice, never got the chance to see their reunion before her death a year ago. Rachelle states her newfound sisters have “two new pieces” of their mum in her and Kristelle.

Singletons Will Be Matched on Their DNA By 2025, Say Researchers