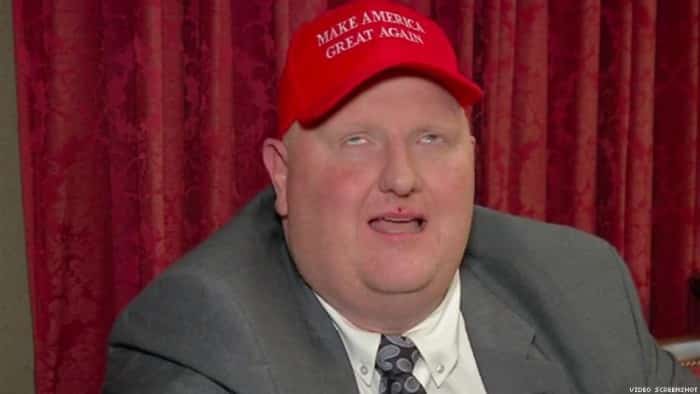 If alt-right politicians ever gain control of our country we’re in big trouble. Their serious lack of understanding of the world today is astounding. It’s safe to say that they won’t be satisfied until all of the sinners are executed, all of the Mexicans and Muslims are deported, and women are back in the kitchen only to be seen during meals and weekly mating rituals. If you don’t believe that, you will after reading these statements made by alt-right politicians.

Women Can Choose To Be Infertile

Apparently, women have Jedi mind powers that prevent us from getting pregnant if we’re raped. At least that’s what former U.S. Representative Todd Akin thinks. In a 2012 televised interview, Akin was asked if he thought abortions were justified in cases where women were raped, and this was his response:

If it’s a legitimate rape, the female body has ways to try to shut the whole thing down.

This is why we need to improve our country’s education system. Less religion, more science. Akin later said he misspoke, likely after someone explained to him how the reproductive system works. Love how he made sure to say “legitimate rape” though. His excuse was that it’s a law enforcement term. Strange that he knows what words the police use for rape cases yet he doesn’t understand how a child is conceived.

Rape Is In God’s Plan

It would seem that if a woman is raped, she should rest easy knowing it was all part of God’s plan. Former Republican candidate Richard Mourdock was running for one of Indiana’s U.S. Senate seats when the topic of abortion was brought up in a 2012 debate, and what’s a conversation on abortion without bringing up rape? Anyway, here’s what he had to say:

Even when life begins in that horrible situation of rape, that it is something that God intended to happen.

This is what happens when we allow religion to be studied in public schools instead of science. Mourdock eventually backtracked on what he said, claiming he meant that the child born from rape was part of God’s plan, not the actual rape. If you’re going to spew religious nonsense, then at least spew it .

Drown The Gays In The River

What would you do if one of your kids came out as gay or bisexual or transgender? It would seem that Republican Member of the West Virginia House of Delegates Eric Porterfield would drown them. At least that’s what he said in a televised interview after he was asked what he would do if his son or daughter came out as gay or lesbian.

Well, I would dress my daughter first, as I would take her for a pedicure, I’d take her to get her nails done, and see if she could swim.

If it was my son, I would probably take him hunting, I would take him fishing, then I’d see if he could swim.

Member of the West Virginia House of Delegates Eric Porterfield

Porterfield has made disgusting comments about the LGBTQ community in the past, comparing them to the KKK and terrorist organizations, but this is just nauseating. To make matters worse, he had this big creepy smile on his face throughout the interview as he casually talked about murdering his children. He later showed some remorse for his comments, perhaps after someone pointed out that his comments could be seen as threats to his children and even neglect. Porterfield wrote on F:

In my office thinking about my wife and children. I was thinking that if my kids did indulge in any type of sinful life, I would love them, pray for them, fast over them and seek the Lord to watch over them. I would not beat them, burn them, shock them or definitely not DROWN them.

Well, that’s good to know that he won’t beat or murder his children. We all know this guy hasn’t fasted a day in his life though.

Heroin Dealers Are The Community Pharmacist

Have you heard? Your local drug dealers got a promotion, and are now considered your community pharmacists! According to Former Arkansas Governor Mike Huckabee, a heroin dealing pharmacist must exist in order for a Planned Parenthood that provides healthcare exist.

Planned Parenthood isn’t purely a ‘healthcare provider’ any more than a heroin dealer is a community pharmacist.

Obviously, Huckabee has never been to a Planned Parenthood facility. They offer a ton of healthcare services that women need like cervical and breast cancer screening, STI testing, prenatal care, and family planning. Yes, they offer abortions but so do many OBGYNs. (That’s the lady-doctor for the male readers.)

Drug dealers are so profitable because our country’s healthcare system is so screwed up. People self-medicate with illegal substances often because they’re more accessible than prescription medications. Taking down Planned Parenthood and making abortions illegal would just allow drug dealers to make more cash selling abortion pills and create an increase in underground clinics.

If the alt-right ruled the country, women would have to start putting on chastity belts before getting in bed with their husbands each night. At a meeting of the Utah legislature in 2015, this subject came up and Utah State Representative Brian Greene had some seriously cringeworthy things to say.

If an individual has sex with their wife while she is unconscious, a prosecutor could then charge that spouse with rape, theoretically … That makes sense in a first date scenario, but to me, not where people have a history of years of sexual activity.

Clearly, this man has had sex with his wife while she was unconscious. Either that or she tends to fall asleep while they do the deed. Fortunately for the sake of humanity, there were some people at the meeting who disagreed with him, but Greene dug his hole deeper anyway by trying to justify his statement. He explained that he thought rape should be determined based on whether or not the accused knew that the victim was unconscious. Because that’s exactly what rapists need, more acceptable excuses for their actions.

All allegations remain just as allegations, even half a year after the outbreak of the coronavirus pandemic in China. Everyone outside of the country is left to their own devices to decide whether or not what they see on social media is true. However, things take a different turn when the complaints start to trend… END_OF_DOCUMENT_TOKEN_TO_BE_REPLACED

In his latest weekly blessing at the Vatican, Pope Francis has warned Catholics about the dangers of gossip. Although his weekly blessing is not related to COVID-19, the current pandemic tormenting the world, he has raised important points that everyone must remind themselves of. Pope Francis has been in the highest seat of power in… END_OF_DOCUMENT_TOKEN_TO_BE_REPLACED