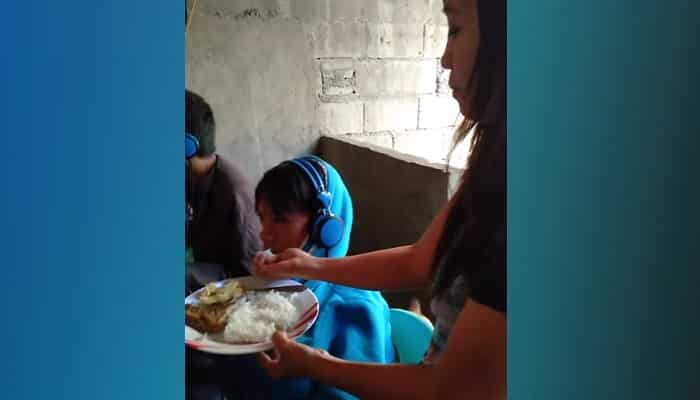 It may not look like it, but video games have actually overtaken both film and music as the most profitable entertainment industry medium. In fact, they are worth more than both industries combined. That means a lot of people play them. Children more so. Some have gotten quite addicted to them, like one kid who had to be hand-fed by his mom in front of the computer.

The incident happened in the Nueva Ecija, Philippines to a boy named Carlito Garcia III. Carlito, 13, was an avid player of Rules of Survival, a popular battle royale game. He loved it so much that one day, he played it for 48-hours straight without leaving the computer rental shop. This got his mother, 37-year-old Lilybeth Marvel, worried; so she went in to feed him by hand:

As you can see, Carlito has gotten quite comfortable and at home in his rented gaming station. He is quite skinny but still won’t take his eyes off the screen. Lilybeth was worried that her son would forego even the most basic of human urges and needs just for video games, hence why she visited him in the gaming station to see to him.

Apparently, Carlito’s parents were even compelled to temporarily stop his schooling because of his addiction to video games. Lilybeth explained “I used to just nag about his online games. But that didn’t work. So I’m trying a different approach. I try to make him feel that no matter what happens, I am his mother who loves him and takes care of him.”

The moment he was inaugurated, immediate changes made by Biden made headlines across the country. These are many of the controversial issues and topics that were shunned and ridiculed by the former administration. Americans can finally breathe a sigh of relief that these concerns have finally reached government policies. It seems clear that Biden has been… END_OF_DOCUMENT_TOKEN_TO_BE_REPLACED

Presidential pardons are one and many in the history of the US. There are many times when US Presidents granted reprieves for their citizen’s misdeeds. The US President may grant a pardon for any individual, including himself, for any crimes done against the country and its citizens. This issue of Presidential pardons has been trending… END_OF_DOCUMENT_TOKEN_TO_BE_REPLACED