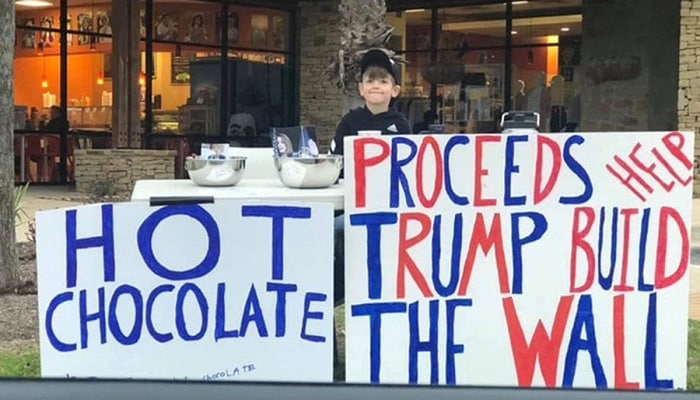 Trump has supporters, that much is true. Some supporters will condone anything he does no matter how obtuse it can be. It can be anything, but the most worrying of all is shutting a government down just to get a wall built. Some supporters even donated to a failed fundraiser for it. Heck, one kid even sold hot chocolate to raise money for Trump’s wall.

The incident happened in Texas to a 7-year-old boy whose parents were Republican activists. He goes by the first name Benton. Benton wanted to support Trump’s plan to build a wall, which we all know does not come cheap. Hence, Benton sold cocoa or hot chocolate so he can earn enough money to donate it for the border wall funds:

Benton also admitted that he got motivated to sell hot chocolate for the wall after attending the inauguration and watching the State of the Union address. His hot chocolate stand was then initially set up in his local neighborhood but he eventually moved to a mall. Benton was able to raise around $1,500 in the first two days, but not without some problems.

During his activity, Benton was also wearing a Trump hat– a certified backlash magnet. Of course, this drew negative attention both to him and his chocolate stand, he recalled that “three women in pink hats” made fun of him. The worst part was that some people called him “little Hitler,” according to the kid.

TONIGHT AT 10: 7-year-old boy raising money for the border wall. Hear from his family only on CBS Austin https://t.co/ukzyOEffhE pic.twitter.com/KKLHEPJAXK

It has only been a few days since Benton began his hot chocolate stand. The kid and his parents do hope to hand in the proceeds to Trump in person, or at the very least, mail it to the president.

The US Presidential elections are just days away and Americans all over the world are bracing themselves for the outcome. Celebrities are using their social media influence to encourage every registered voter to exercise their rights and to vote wisely. A multitude of tactics have been used by celebrities for years and, each time, the… END_OF_DOCUMENT_TOKEN_TO_BE_REPLACED

Election day is coming this November and everyone is preparing to cast their votes when the day is here. You may have voted numerous times and have smooth voting transactions every time. However, we will never know when an unwanted scenario suddenly happens. Doing a little research to learn how to handle unexpected mishaps may… END_OF_DOCUMENT_TOKEN_TO_BE_REPLACED

The tensions are high for the 59th quadrennial US Presidential elections. Americans all over the world are glued to their screens to track the polls. Just like in every other election, every vote matters. It is every American’s right to contribute to the selection of a President. You may think that you can only cast… END_OF_DOCUMENT_TOKEN_TO_BE_REPLACED