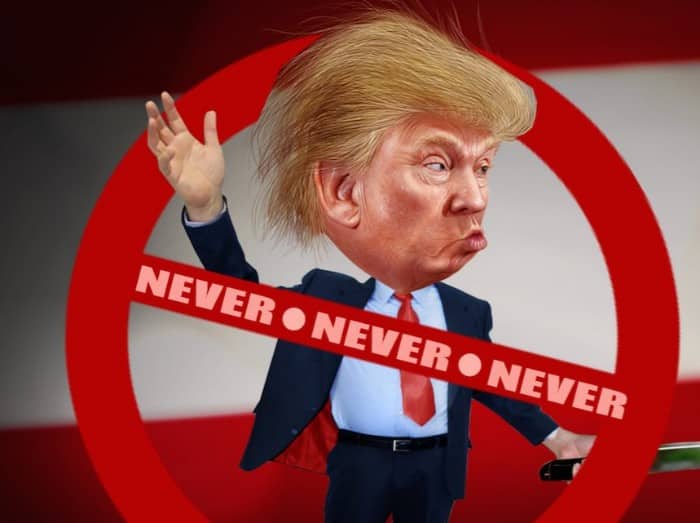 There are exactly 699 days left of Trump’s reign and 621 days until the next presidential election, give or take a few days depending on when you’re actually reading this. It’s starting to look like the next presidential election will be our best bet at getting rid of this fool, but that doesn’t mean there isn’t a lot of work that needs to be done between now and then. To start, we can all start fact-checking the things we share online, or at the very least, start following some reputable pages. These are the best Anti-Trump Facebook pages that not only entertain, but steer clear of fake news.

With nearly 200k likes, the #NeverTrump Facebook page describes themselves as “Conservatives, moderates liberals dedicated to opposing Donald Trump and making America GOOD again.” Not only do they keep followers up to date with news on our child-like president, but they mix up the content with hilarious anti-Trump memes and videos. Follow them to keep up with political news without all of the nonsense written by one of Trump’s minions intended to muddle the water.

If you’re looking for the most hilariously controversial political memes on the internet, then join Biased Memes’ nearly 200k Facebook followers. They share the kinds of Anti-Trump memes that are not only relevant but shockingly honest. They describe their page as “Dank political memes and progressive opinions.”

Join the 1.3 million members of the Anti-Trump Army who are fighting to get Trump out of office. Their Facebook page describes themselves as a “political organization dedicated to defeating Trump’s radical agenda and sending him packing in 2020.” Associated with Occupy Democrats, the Anti-Trump Army page shares a wide variety of reliable news pieces and videos that reveal the shady side of politics.

Speaking of Occupy Democrats, their Facebook page is one of the biggest platforms for political information on the internet. They describe themselves as having a mission to “enact progressive change and defeat President Trump’s supermajority in 2018 and send him packing in 2020.” With over 7.6 million followers, it’s safe to say that they share some truly progressive articles and memes on equality, political corruption, and Trump extremism.

Join the resistance by following We Resist on Facebook and become part of a community of near a half a million people and growing. They describe their page as “a movement to stop Trump’s agenda” by sharing news about how Trump’s fans are destroying our country combined with some hilarious memes and political tweets to keep the mood light.

The Americans Against Trump Facebook page keeps it’s nearly 600k followers up to date on what’s going on in the White House as well as across the country. They follow the stories of activists, immigrants, racism, and political scandal so that you don’t have to work to find the news sources for yourself. Americans Against Trump also shares a ton of videos and photos for those of you who prefer to get your news visually.

Together with the fireworks for the Independence Day weekend, the latest explosive Hollywood news involves no one else but the controversial Kanye West. The famous celebrity has revealed his plans for a presidential run. Originally planned for 2024, he has stated that he is actually going to run for the 2020 Presidential elections in November. The… END_OF_DOCUMENT_TOKEN_TO_BE_REPLACED

Recent trends have reported that K-pop fans in the US are getting mixed in with current issues in politics. K-pop fan communities are using online platforms to rally up and protest against racism in the United States. In support of the #BlackLivesMatter movement, the online K-pop community has come together in protest. Never has it… END_OF_DOCUMENT_TOKEN_TO_BE_REPLACED