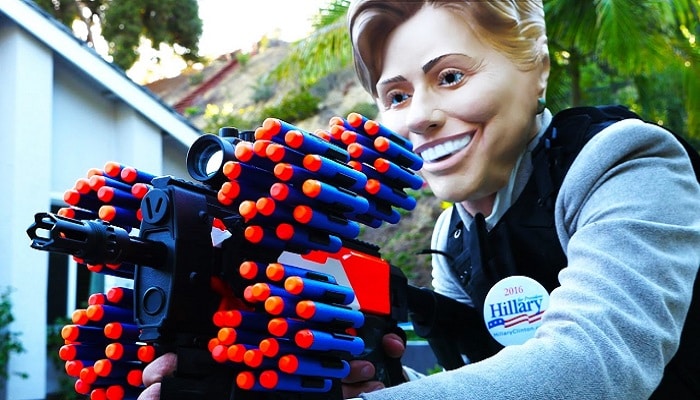 Kids’ parties are fun, right? There are lots of games for those kinds of parties and they are all harmless and  because after all, children should have fun. Unfortunately, for the children of a performing arts school, their fun had to be cut short because some adults thought their “Shoot the President” nerf-gun party was a little too much.

It happened in Cleveland, Ohio. A nerf-gun party was hosted and cooked up by the Olmsted Performing Arts community  in Berea. Of course, when kids parties are involved, you have to have several games. The list of games was alright until some parents saw something called “President” where one person pretends to be an unspecified president with bodyguards and he is to be shot with nerf guns.

“There is one president with bodyguards. Everyone else tries to eliminate or shoot the president,” according to the now deleted description on the school’s website. This angered some adults even though there was no mention of a specific president. However, anyone living in the US right now will surely know the political tension involving Donald Trump, so there.

“I think it’s unfortunate that they chose that kind of theme only because of the atmosphere we are living in now. For kids, it’s just fun, but they don’t realize what they are being taught subconsciously,” says Ohio resident Julie Berghaus. Others also agreed with her sentiments regarding the party:

Completely inappropriate. We no longer show respect for authority in this country. What message are we teaching our kids!!!!

This prompted the said school to cancel their “Shoot the President” nerf-gun party. Adam Sheldon, an official of the school also had to issue an online apology to whoever got offended by the party game:

As soon as it was brought to our attention BW CAS removed the party theme from the OPA site. We apologize to anyone who was offended by the presence of this theme; it does not reflect BW’s values in any way.

What do you think of the issue and the reaction to it? Feel free to discuss in the comments.

The US arms sale industry is large and successful. More than 30% of exported weapons in the world come from the United States. They supply to no less than 90 nations making it one of the largest suppliers of weapons in the world. The US makes an estimate of almost 200 Billion dollars in annual… END_OF_DOCUMENT_TOKEN_TO_BE_REPLACED

Now that the election results are almost final, we all want to ask what’s going to happen to Donald Trump after leaving the office? All US Presidents inevitably reach the point where they leave the White House.  Besides, the constitution states that all US Presidents are subject to a two-term limit. What do former presidents… END_OF_DOCUMENT_TOKEN_TO_BE_REPLACED

This is the first time in modern history that the US held presidential elections in the middle of a pandemic. In truth, the US elections may have overshadowed COVID-19 and the side effects are limitless. America is facing a tough crisis of discontentment with the current administration. An understandable case but a situation that may… END_OF_DOCUMENT_TOKEN_TO_BE_REPLACED