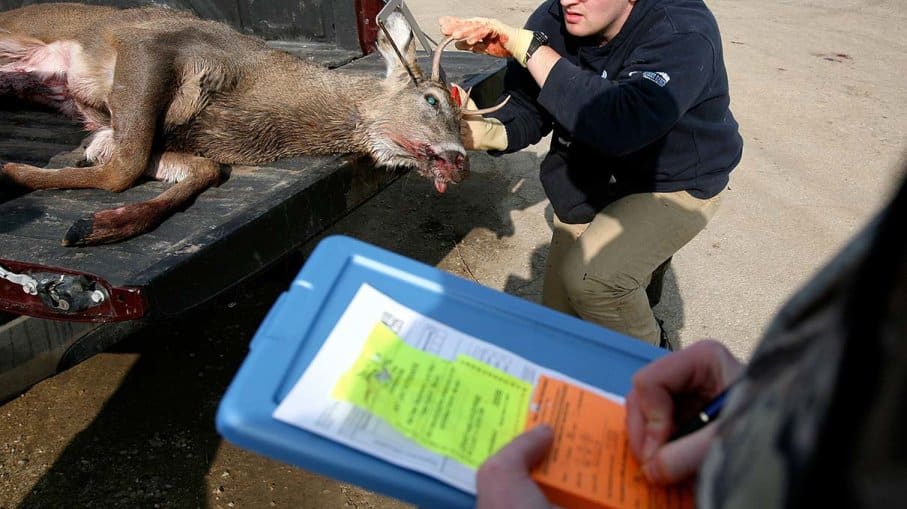 Who would have thunk? Our esteemed politicians quibble over every little thing, but in this instance, they are actually working – fast – to get a bipartisan bill passed that will study (and deal with) the zombie deer disease that has rapidly spread across the country.

Sure, it has taken a weird, alarming animal disease to wake the Congress up and work quickly to come up with a bipartisan bill, but it surely is a better reason for a national emergency than the gibberish that Trump has been spouting.

The ailment, medically known as chronic wasting disease (CWD), affects deer, elk, moose, and caribou/reindeer. First documented in the 1960s, it is always fatal. Worse, there is no known way to prevent or cure the disease.

Last week, director of the Center for Infectious Disease Research and Policy at the University of Minnesota Michael Osterholm warned lawmakers about CWD, raising the concern that the disease may jump from animals to humans, much like Mad Cow Disease.

“It is probable that human cases of chronic wasting disease associated with consumption with contaminated meat will be documented in the years ahead. It’s possible the number of human cases will be substantial, and will not be isolated events,” Osterholm said.

CWD is a prion disease, or “transmissible spongiform encephalopathies (TSEs), a family of rare progressive neurodegenerative disorders that affect both humans and animals.” It does not manifest immediately, taking up to a year before symptoms such as drastic weight loss (wasting), stumbling, and listlessness show.

Realizing the gravity of the situation, members of the have been quick to push a bill that will have federal agencies studying the disease at length, including ways to prevent and cure it. H.R. 837, or the Chronic Wasting Disease Transmission in Cervidae Study Act, was introduced on January 29, by Rep. Ralph Lee Abraham of Louisiana. With cases having been confirmed in 26 states, legislators are taking more aggressive action.

“Wyoming’s deer, elk and moose populations have been negatively impacted by chronic wasting disease for decades. Now, 26 states have detected chronic wasting disease and new cases arise each day. We need to know more about how this disease spreads and which areas are most at risk. Our bill gives wildlife managers the tools they need to research and identify exactly where wasting disease is most prominent and how we can better prevent it. It’s a critical first step to addressing this debilitating disease and keeping our wildlife herds healthy,” says Barrasso.

On Tuesday, February 12, Pennsylvania’s Rep. John Joyce stepped up to state that he is co-sponsoring the bill.

“We cannot just let Chronic Waste Disease continue to expand its footprint in our region without addressing it. The legislation I am cosponsoring today will allow us to devote all the possible resources necessary into studying this disease and developing a strategy to combat it, but will do so at no detriment to the hunters in PA-13,” the politician said.

Other senators who co-sponsored the legislation include:

Should the bill be passed, the United States Department of Agriculture (USDA) and Interior secretaries will be required to work with the National Academies of Sciences. Together, they are to take into account data from federal and state agencies, which includes:

The bill is great and all, but what is being done in the meantime? Scientific studies will certainly take time, more so the cure.

You may or may not be glad to know that government agencies haven’t been sitting on their hands. While Congress is working on the bill, agencies such as the Pennsylvania Game Commission are in the process of launching deer hunts in order to cull the herd and hopefully stop the disease from spreading.

In other states, such as North Carolina, transporting deer (and other members of the cervid family) carcass has fallen under stricter regulations regarding processing and packaging. Additionally, only the following is allowed:

In Indiana, hunters from certain areas are being asked to have their deer tested.

While there have been no reported cases of CWD in humans YET, it is best to lay off the venison. Oh, and don’t ingest any aphrodisiac that has deer antler as an ingredient. Also, if you’re a hunter, you may want to find a safer way to kill time.

The world is currently crippled by a global health pandemic. However, more and more catastrophes seem to be continuously tormenting the world. Threats of a recession, unemployment, and illness do not seem to be enough punishment for mankind. Explosions, threats of war, and accidents are happening. What is worse is that there are natural calamities… END_OF_DOCUMENT_TOKEN_TO_BE_REPLACED

The Michelle Obama Podcast was released on the 29th of July and can be streamed on Spotify, both for free and premium users. The world is currently hyped that the Former First Lady of the United States has released the first episode of her latest podcast. What made listeners even more excited was when she… END_OF_DOCUMENT_TOKEN_TO_BE_REPLACED