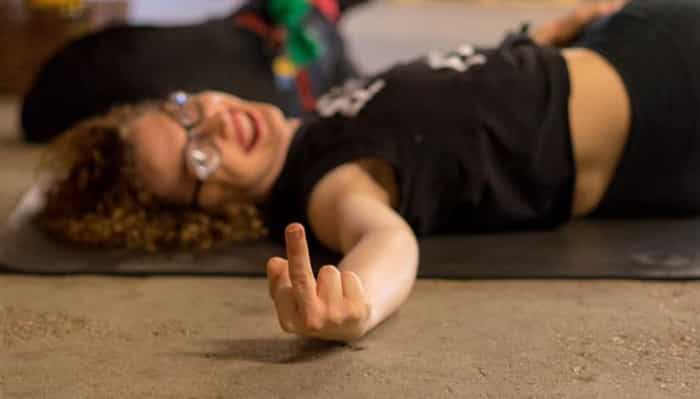 The world is full of big dilemmas and conflicting ideas and it can get rather confusing. On one hand, you want to preserve your mental state and meditate, while on the other, you just want to unleash the Hulk against all the hate and bigotry going on. However, what if you can do both? Well, now you can with this thing called “Rage Yoga.”

Wouldn’t you know it, the list of all the hybrid yoga just keep getting You’ve heard of yoga with goats, now, prepare for yoga with… anger. Okay, those two notions are not exactly complementary, however, “Rage Yoga” from Houston, Texas apparently just makes it work. How you ask? With beer and swearing, lots of ’em.

Oh, now you’re interested, huh? This new breed of yoga is the speciality of instructor Ashley Duzich. She is also the head of Rage Yoga where she assists students with cursing, screaming, and drinking beer all the while stretching and doing some zen poses.

“We are all angry about something and we all have been holding onto an ‘F’-bomb for a little bit too long. So that’s what this does – is – it allows you to have a safe space to let go of your and frustration and rage in a healthy way… and then also wash it all away with some ice cold beer,” explained Duzich.

Duzich did admit that Rage Yoga was something she created after her regular 10-year yoga practice was losing its effect on her. Among the things her students scream about are usually bottled-up anger and out-of-context bellows at the people or situations they hate which are not present in the session.

With that in mind, Duzich invites anyone interested, “We actually take beer breaks during the class. It’s definitely not for everybody and that’s totally OK… I also don’t recommend bringing your children.”

The moment he was inaugurated, immediate changes made by Biden made headlines across the country. These are many of the controversial issues and topics that were shunned and ridiculed by the former administration. Americans can finally breathe a sigh of relief that these concerns have finally reached government policies. It seems clear that Biden has been… END_OF_DOCUMENT_TOKEN_TO_BE_REPLACED

Presidential pardons are one and many in the history of the US. There are many times when US Presidents granted reprieves for their citizen’s misdeeds. The US President may grant a pardon for any individual, including himself, for any crimes done against the country and its citizens. This issue of Presidential pardons has been trending… END_OF_DOCUMENT_TOKEN_TO_BE_REPLACED