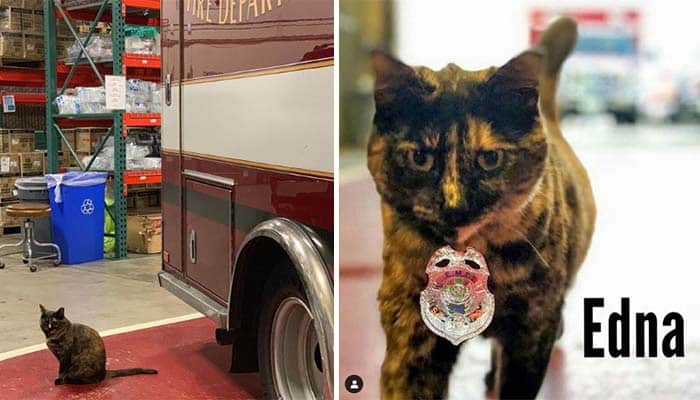 Staff at a fire station in San Francisco are distraught after their cherished “fire cat” was booted out by administrators.

The fire cat, real name Edna, arrived at Station 49 five years ago, when she was still a tiny kitten. The team at the department’s Ambulance Deployment Facility took in the feral furbaby, until she became a fully-fledged member of the crew.

“We take her to the vet now, give her treats and she calls our station home now,” employees told local newspaper SFGate.

THE DEPARTMENT IS STILL EVICTING EDNA TODAY! 💔 5yrs of unwavering love and support and they still are kicking her out.

“As I’m sure you can imagine, our jobs are very, very stressful. A lot of us see Edna as our little stress unit.”

Unfortunately, the department were recently sent an anonymous complaint about Edna, claiming she “comprised the sterility” of the “medical supplies, equipment and pharmaceuticals” held there.

As a result, the beloved fire cat has been ordered out of her adopted home.

Cuddles with one of my favs🤗

Now, the team at Station 49 have began a social media campaign in the hopes of keeping their cat. As well as contacting SFGate, they created the hashtag #ednastays on Edna’s Instagram profile.

And the story seems to have touched the hearts of San Francisco, with fans of fire cat using social media to convince administrators to let her stay.

Come on @SFFDPIO DO SOMETHING!

Animals are good for people suffering from PTSD, and First Responders have a high percentage of this. So, the cat is essential for their well-being. That is a fact. Cat stays. 😬

I can’t believe this can even be an issue. What is wrong with people?

These firefighters are wonderful to save Edna and fight for her! Edna was CLEARLY HOMELESS! It’s disgraceful that some people elevate all of human life and relegate creatures as less important!

Including other fire stations and their own adorable fire cats

Still, despite their efforts, Edna was removed from Station 49 on Monday. The team say that she has fortunately been adopted by a member of staff as a pet.

“She has somewhere to go now but it just sucks to uproot a once feral cat from her home of five years, and one that she could come and go as she pleased, but chose to stay with unlimited 24/7 loving from 200+ amazing EMS members,” Station 49 said on Instagram.

“All this over an ‘anonymous’ complaint that was made with malicious intent.”

Leaving Sta49. She has somewhere to go now but it just sucks to uproot a once feral cat from her home of 5yrs and one that she could come and go as she pleased but chose to stay with unlimited 24/7 loving from 200+ amazing EMS members. All this over an “anonymous” complaint that was made with malicious intent. https://www.pressdemocrat.com/news/9272172-181/san-francisco-firefighters-ask-public?sba=AAS

Why Cats Bite Your Hand Sometimes When You Pet Them